An employee-led effort throughout Orange County government and its constitutional officers raised $828,376 to support the Heart of Florida United Way and its mission to fight for the education, health and financial stability of Central Floridians. Local government workers have led the giving campaign for 30 years, but this year surpassed its previous record by nearly 20 percent, according to officials.

Departments and constitutional offices recognized for their fundraising efforts include: 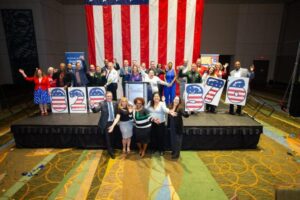 “Orange County Government partners with the Heart of Florida United Way to support its residents through a vast array of programs,” said Danny Banks, Orange County’s Deputy County Administrator of Public Safety, as well as the 2022 chairman of the campaign. “We’re honored to work with this organization, which proudly serves and gives back to our community.”

Each employee is offered the opportunity to donate through a payroll deduction or by hosting fundraising events throughout the County. Notable fundraisers include collecting donations for parking during events at Orlando venues, community golf tournaments and Orange County Fire Rescue’s 343 Hero Challenge.

“We’re beyond grateful to Orange County employees for their generosity and dedication to make our community a better place,” said Jeff Hayward, president and CEO of Heart of Florida United Way. “Year after year, they step up in a greater way for Central Florida. They’re making a difference by delivering hope and a better future for our neighbors in need.”

Since 1939, the Heart of Florida United Way has grown to be one of Central Florida’s largest supporters of local health and human service agencies. Beyond the giving campaign, Orange County’s partnership with the nonprofit plays a vital role in serving the community, most recently by working in collaboration to support residents affected by COVID-19 and recent hurricanes.