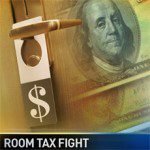 The lawsuits, filed Tuesday in Tallahassee, argue that Broward County acted unconstitutionally earlier this year when it told the companies and subsidiaries that they owed a total of $484,000 in tourist-development taxes, interest and penalties.

The cases are just the latest in a series of legal and political fights pitting counties and the online companies that serve as middlemen for travelers looking for good deals.

The fights center, at least in part, on this question: When a traveler books a hotel room through an online service, should the tourist-development tax be applied to the total cost?

In the court filings Tuesday, the companies raised a series of arguments, including that they are not subject to the tax because they do not “own, operate, manage or control any hotels or hotel rooms” in Broward County.

Cragin Mosteller, a spokeswoman for the Florida Association of Counties, said she had not seen the Broward County cases, but she said the attempts to collect taxes on the online companies are an “issue of fairness.”

Lawmakers this year considered bills that would have made clear the online travel companies do not have to pay taxes on the fees they collect for their services. But those bills died at the end of the legislative session.

Broward County has been involved in battles about the online travel issues for at least two years, according to court records.

In the new cases, it is seeking to collect $291,470 from Priceline and related companies and $192,666 from Travelocity and a subsidiary.