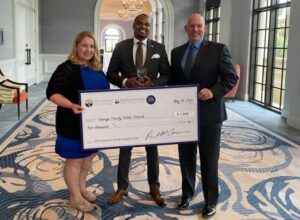 The Florida Education Foundation named Orange County Public Schools and the Orlando Magic as recipients of the 2021 Commissioner’s Business Recognition Award. The award recognizes Florida’s business leaders and partners that have shown the most commitment in bringing positive change and implementing bold, innovative approaches to improve the academic performance of students in Florida’s education system and communities.


OCPS has had a long-standing partnership with the Orlando Magic going as far back as 1989. The Orlando Magic and its players have had a significant role in developing and participating in programs that have had a defining moment of inspiration for our students. Programs such as Magic Mentoring, Magic Fit, Her Time to Play, Magic Fit 4-Week Challenge and Pick, Read and Roll have motivated and encouraged thousands of OCPS students each year.

The Orlando Magic was also recognized by the district in April during the annual Crystal Awards for their dedication to student success. Honorees were unveiled in a Virtual Wall of Distinction by the Foundation for Orange County Public Schools. The Virtual Wall of Distinction recognizes pioneers, leaders and community partners who have enhanced student achievement continuously throughout our community involvement programs.