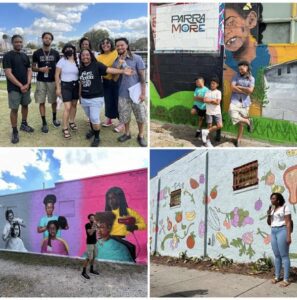 Three new murals in Orlando were presented as “An Ode to Parramore: Three Walls. Three Artists. One Community,” part of a larger effort to support the area’s small businesses in the new Parramore Main Street District. Most minority-owned small businesses in Parramore and downtown Orlando suffered under Mayor Buddy Dyer’s policies over the years, but now he is trying once again to act as if he cares about Parramore.

Parramore Main Street and Art of Collab utilized part of a $75,000 grant from Wells Fargo’s Hope USA Initiative to fund the mural project.

The murals revealed Saturday were painted by artists AJ Barbel, Jordan Jones (JJ The Artist), and Tasanee Durrett (aka VISORIES).


If you would like to see the murals, the locations are: