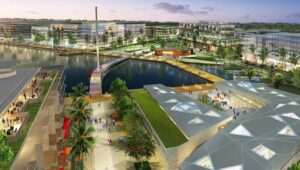 U.S. Representative Val Demings announced a new $50.8 million grant through the American Rescue Plan’s Build Back Better Regional Challenge. The funding will go to “Building Central Florida’s Semiconductor Cluster for Broad-Based Prosperity,” a project led by the Osceola County Board of County Commissioners in partnership with the Orlando Economic Partnership, University of Central Florida and Bridging the Innovation Development Gap (BRIDG). Rep. Demings previously wrote to U.S. Secretary of Commerce Gina Raimondo in support of the Osceola County project.


“Today’s new grant means new good-paying jobs right here in Central Florida,” said Rep. Demings. “Thanks to the American Rescue Plan, which I was proud to support, we are growing an economy that works for everyone and reclaiming the computer chip manufacturing industry from China. This competitive grant will help the growing semiconductor cluster at NeoCITY invest in research and production, plus new training and education programs to make sure that these new jobs are available to all Floridians. I’ll keep fighting in Congress to create new jobs and keep Florida on the cutting edge of science, technology, and manufacturing.”

Rep. Demings supported the American Rescue Plan, calling it the most significant emergency relief legislation in American history. She supported it to crush the COVID-19 virus, return children safely to the classroom, get vaccines into arms, put dollars in pockets, and get people back to work. It will also be a major part of the Senate campaign in Florida, as Demings challenges incumbent Senator Marco Rubio, who voted against the American Rescue Plan.

With $50.8 million in EDA funding, the Building Central Florida’s Semiconductor Cluster for Broad-Based Prosperity will accelerate the growth of the specialized semiconductor cluster at NeoCITY, a 5,000-area technology park developed in partnership with the state of Florida. The coalition will upgrade the capabilities at the Center for NeoVation advanced manufacturing facility, allowing it to expand research and production. The coalition will also work to align local education and training programs with the needs of the region’s semiconductor manufacturers to facilitate the creation of good-paying jobs.

The United States developed and pioneered semiconductor technology, but today just 12 percent are manufactured domestically. 75% are manufactured in East Asia, where government subsidies make it impossible for American workers to compete.

Rep. Demings also previously introduced the Reclaiming the Solar Supply Chain Act, which would restore American leadership in solar power manufacturing and crack down on the Chinese Communist Party’s human rights abuses by providing funding to build new solar component factories in the U.S., supercharging a domestic industry that is currently dominated by China but which has the potential to create up to 1.5 million new jobs across the United States by 2035.