The Orlando Police Department has announced major arrests in the November shooting at the Jones High School Athletic Complex for the Jones High vs. Wekiva High football game. For the past 32 days, Orlando Police Detectives have been working around the clock, as this was a complex case that involved four victims and three shooters. 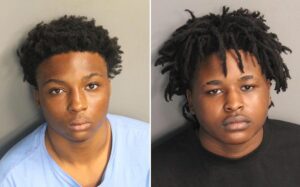 According to OPD, at approximately 8:22pm on Saturday, November 12th, officers working extra duty at the Jones High School Athletic Complex (750 S Rio Grande Avenue) for the Jones High vs. Wekiva High football game heard shots fired from the parking lot north of the football field. Upon arriving to the parking lot, two adult male victims were located with gunshot wounds. One of the victims succumbed to his wounds and the other was transported to a local hospital with non-life-threatening injuries. At approximately 10:30pm, police were notified that an additional victim self-transported himself to a local hospital after sustaining a non-life-threatening gunshot wound.

The Orlando Police Department Homicide Unit Detectives, the Gang Unit and School Resource Officers all partnered together in this shooting case. OPD said the agencies “worked diligently to bring the suspects to justice.”

Also involved in this incident was 15-year-old Elijah Ayrow, who is another shooter in this incident. According to Orange County Public Schools, Elijah Ayrow was withdrawn from the OCPS district in May of 2022 and is not enrolled at any district operated schools. OPD said he was arrested early last week for shooting one of the four people injured that evening. He is charged with Attempted 2nd Degree Murder with a Firearm.

But Orlando detectives are not done with case and they continue to investigate. OPD made it clear they will charge anyone who was acting in the wrong with this incident or even if they hindered the investigation or tampered with evidence.

If you have information you think local police should know, please call 321-235-5300 or report a tip anonymously to Crimeline at 1-800-423-TIPS (8477). When you call Crimeline, your information will be taken in strictest confidence. Your identity will be protected and you will never have to give your name. You will be given a confidential tip code number. Tips that lead to the felony arrest of suspects and/or the recovery of stolen property and drugs may be eligible for cash rewards of up to $1,000. All tips eligible for a reward are paid to tipsters using an anonymous process. Remember, if you witness a crime in progress, you should call 911.