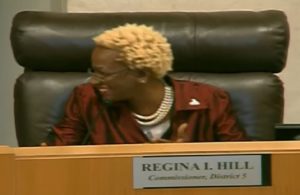 Orlando City Commissioner Regina Hill’s character is being blasted in new court documents regarding the foreclosure of her home and the enormous amount of debt owed to creditors. In legal documents filed in United States Bankruptcy Court, Commissioner Hill’s behavior is described as “implicating a scheme” and her actions show an “absence of good faith.”

In 2015, Commissioner Hill was ordered to pay a final judgement in the amount of $164,081.57, resulting in the foreclosure of the one home she owns. Hill’s Baywood Avenue home, the property in question, is located outside of the Orlando city limits.

According to new documents filed in bankruptcy court, Commissioner Hill has submitted a repayment plan that includes payments in the amount of $3,000 every month for the next 60 months to her creditors. That amount of money would require nearly every dollar from her salary as City Commissioner, raising questions about how Hill would pay for her living expenses, including her current rent in the city limits where she serves.

The promise to fulfill her repayment plan is also questionable considering Hill’s re-election is far from guaranteed, which would strip her of her $52,000/year city salary. Hill has not publicly disclosed any other income.

U.S. Bank National Association, as trustee for GSMPS Mortgage Loan Trust 2006-RP2 (“Movant”), filed a new motion for Prospective In Rem Relief from the automatic stay to enforce final judgement of foreclosure against Regina Hill. The current legal action against Regina Hill requests relief from the automatic stay so Movant and the bank “can pursue its in rem remedies without further delay.”

The court documents ask for relief “in order to finalize the foreclosure/eviction process” against Regina Hill.

To review the full court documents and for more background about the ongoing foreclosure and bankruptcy problems plaguing Commissioner Regina Hill, click here.