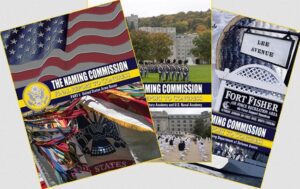 This announcement followed a congressionally mandated 90-day waiting period that started when the Naming Commission shared the third and final part of its report with the Secretary of Defense and U.S. Congress in September 2022. The complete report included the Naming Commission’s plan to remove the names, symbols, displays, monuments, and paraphernalia that honor or commemorate the Confederate States of America.

In October 2022, Secretary of Defense Lloyd Austin concurred with all of the Commission’s recommendations, including giving nine Army installations and other DoD assets new names that are rooted in their local communities and that honor American heroes whose valor, courage, and patriotism exemplify the very best of the U.S. military. In his memorandum, Secretary Austin also thanked the Commission for its tremendous work and dedication.

Each responsible DoD organization has submitted a comprehensive plan of action and milestones to implement the Commission’s recommendations by its January 1, 2024 deadline.

For more information, refer to the Naming Commission’s reports to Congress.