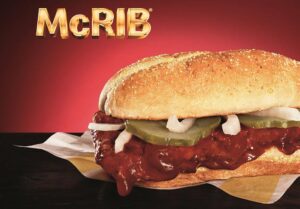 Get your napkins ready for the iconic McRib, as the fan-favorite, famously-saucy sandwich officially returns to participating McDonald’s restaurants nationwide, including Central Florida, beginning October 31st.

BUT this could be your last chance to get it, according to the company. After three straight years headlining McDonald’s nationwide menu each fall, the iconic sandwich is embarking on a “Farewell Tour” – giving fans across the country one more chance to experience a taste of the McRib.


Like any true farewell tour, many are hoping this isn’t a “goodbye” but a “see you later.” Because as McRib fans have experienced time and time again: you never know when – or if – the McRib is coming back.

Before the McRib takes its final bow, McDonald’s is paying homage by bringing fans on a trip down memory lane with the McRib’s “Greatest Hits” – featuring special moments that made the McRib the icon it is today: