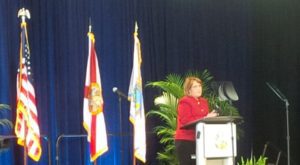 In her annual State of Orange County address, Mayor Teresa Jacobs painted an inspiring snapshot of Central Florida while updating the community on the economy, county initiatives and the stewardship of taxpayer dollars, ending with a fitting tribute and reflection on the tragic Pulse attack. Mayor Jacobs definitively said the state of our county is strong and unified, adding that our culture is “so strong” and our resilience and inclusiveness is the core of that strength.

“I’m so proud to deliver this annual report to you – our Central Florida community – a community that is more collaborative than ever, more deeply compassionate than even we knew, and in so many ways, a community that is growing more confident every day,” Mayor Jacobs’ began. “From historic milestones to the heartbreaking reality we awoke to on June 12th, we’ve traveled many miles together this year. We’ve leaned on each other and learned from each other, and in doing so, we’ve grown so much stronger.”


The tourism industry was the economic star of Jacobs’ State of the County address. Crediting the “robust tourism industry” for many local successes, Mayor Jacobs praised the industry as well as the investment of tourist development taxes for maintaining our position as the number 1 tourism destination in the country. “Representing approximately one-third of our economy, it’s obvious why the strength of tourism is crucial – not only to Orlando, but to the region and the state,” she said.

Mayor Jacobs touted local successes and achievements. “What other community in the world could ride the wave of so many landmark accomplishments, like the opening of SunRail, the Amway Center, the Dr. Phillips Center for the Performing Arts, a complete renovation of Camping World Stadium, a new MLS soccer franchise along with a new privately-funded soccer stadium, the completion of our beltway and the widening of I-4 underway simultaneously, a new urban campus for UCF on the horizon along with a huge new terminal and multi-modal transportation center at Orlando International Airport,” she rattled off.

“Where else has this much been accomplished in the wake of the great recession?” the Mayor questioned.

She also made it clear her positive message and vision for Orange County will not yield until her second term officially ends. “As I approach my last 19 months as Mayor, I pledge to you that my administration will continue with the same unrelenting focus and momentum of our first six and a half years,” Mayor Jacobs added. “Every day, we will remain focused on making progress on complex problems – from affordable housing to discovering more and better ways to serve you, our citizens, and to care wisely for your tax dollars. And just imagine what is to come!”

On the topic of solar energy, Mayor Jacobs was personally proud of her own investment in renewable power, showing off her own home’s solar panels. In a personal moment, her husband held up his phone with an app showing how much they are saving thanks to the solar panels after Jacobs stated he is addicted to the app.

At the end of her speech, Mayor Jacobs paid tribute to the Pulse attack victims and focused on the depth of our community’s compassion as displayed in the aftermath. “This year’s state of the County could focus entirely on the single, defining event of 2016: the Pulse Nightclub shooting,” she said. “First and foremost, my prayers continue to be with the families, friends and loved ones of our 49 brothers and sisters lost in the early morning hours of that day. My prayers also go out to those who were physically injured, and those who bear the deep emotional scars of survival.”

“But to you and to everyone who’s been so deeply affected, remember in our community you are not alone,” Mayor Jacobs added. “Through it all, the world gained a much fuller understanding of Orlando. But it was not just the world’s perception of us that changed — it was also our perception and understanding of ourselves. Through our response to the greatest attack we’ve ever withstood, the greatest loss we’ve ever suffered, we learned something incredible about ourselves.”

Mayor Jacobs noted “we discovered that it is our culture of compassion that makes Orlando such an incredible place to live.”

Overall, Mayor Jacobs effectively and impressively delivered the State of Orange County address, emphasizing her leadership is as strong as the state of the county.

“Together, we will continue to grow our culture of collaboration, compassion, and confidence…that we may continue to be a beacon of light, hope and unity for the world to see,” Mayor Jacobs concluded.

After the State of Orange County address, Mayor Jacobs urged everyone to participate together in a hand-to-hand direct action forming a large heart (see photo) to honor the Pulse victims with the message: “Let’s ALL Connect” (#letsAllconnect).


The 2017 State of Orange County address by Mayor Teresa Jacobs was live-tweeted by Mike Cantone and West Orlando News. Check out some of the tweets during the speech on Twitter.