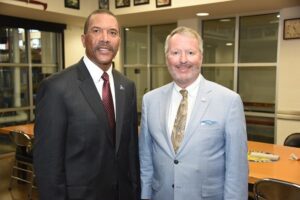 Mayor Buddy sure does know how to pick them, doesn’t he? Here’s another scandal to come out of the Dyer administration.

Orlando Fire Department Chief Benjamin Barksdale was suspended with pay after a warrant was issued in North Carolina, where he faces two charges: assault and battery and assault on a female, authorities said. The accusation says he intentionally punched a woman in the face. The Charlotte-Mecklenberg Police Department in North Carolina investigated the incident.


Barksdale has been Orlando’s fire chief for less than two years after being appointed by Buddy Dyer. Barksdale replaced a fire chief who resigned after he was accused of harassing and discriminating against a female employee. The Orlando Fire Department became plagued by gender discrimination and sexual harassment allegations under former Orlando Fire Chief Roderick Williams.

In March, the Justice Department reached a settlement, through a consent decree with the City of Orlando, resolving allegations that the city violated Title VII of the Civil Rights Act of 1964 when it discriminated and retaliated against Dawn Sumter, a female assistant fire chief with the Orlando Fire Department.

“Sexual harassment in the workplace is intolerable under any circumstance and is particularly pernicious where the victim is a public servant engaged in protecting fellow members of the community,” Principal Deputy Assistant Attorney General Pamela S. Karlan of the Justice Department’s Civil Rights Division said. “The type of sexual harassment and retaliation allegedly suffered by the assistant fire chief in this case prevents women who work in jobs historically dominated by men from protecting and serving the public on an equal basis.”

What a culture Buddy Dyer is promoting as Orlando Mayor.

While Barksdale is suspended with pay, the acting Fire Chief will be Deputy Fire Chief Craig Buckley in his absence.