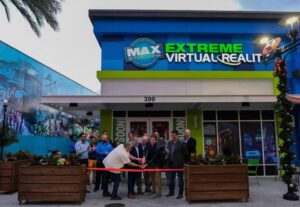 If you thought you’ve experienced all the interactive attractions Orlando has to offer, think again because there’s always something new: Max Action Arena is now open at ICON Park. The attraction says visitors can take fun to the max with extreme free-roam virtual reality, adventure rooms, axe throwing, and an escape room.

Max Action Arena is the place for high-intensity, engaging fun. The 8,000-square-foot entertainment center features a variety of experiences including:


Zero Latency Extreme Virtual Reality
Rather than playing the game, you’re IN the game with Zero Latency VR. Reality blends with the virtual world as you’re dropped into a huge arena to battle or explore with up to eight guests. With Zero Latency VR, you can roam freely in open space, moving however and wherever you want.

Adventure Rooms
Like a cross between escape rooms and video games, Adventure Rooms will challenge you to race against the clock to solve the puzzle in each of these themed rooms. From solving a crime with CSI, breaking codes in a medieval world, dealing with alien abductions or surviving a creepy, cursed room you have to think fast and act fast to solve them all!

Axe Throwing
Sharpen your skills and challenge your friends to an Axe Throwing session. You don’t have to be a lumberjack to enjoy throwing axes at a wood target for points. It’s like darts – but with axes! High tech projected targets allow you to choose from several different games for tons of new challenges.

Escape Room
Escape from Planet Obscura transports you to a distant alien planet as you try and repair your damaged space craft. Can you get your engine repaired and activate the launch sequence before you find yourself stranded in space forever? 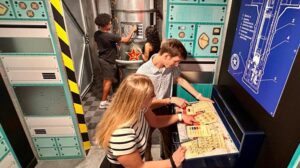 “Max Action Arena is an exciting, interactive entertainment center with several innovative attractions all under one roof,” said Scott Brown, Director of Marketing at Family Entertainment Group. “Whether you’re a thrill-seeking tourist or a local looking for a new attraction the whole family will love, Max Action Arena caters to you.”

The entertainment center also offers packages for group visits. Corporate teams can put their teamwork skills to the test in the Adventure Rooms and the one-of-a-kind Zero Latency VR will be a hit with birthday party guests.

In addition to its interactive experiences, Max Action Arena also offers a selection of beer and wine.

This is the second attraction Family Entertainment Group has opened in Central Florida at ICON Park. The company also owns and operates In The Game ICON Park, a 7,000-square-foot arcade with over 40 cutting-edge games located inside The Wheelhouse.