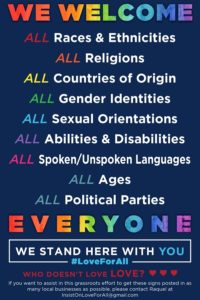 More than 500 colorful signs embracing Orlando’s diversity have popped up inside windows and near cash registers of area businesses since the beginning of last August.

The #LoveForAll movement began the summer of 2018 when Raquel Giorgio, an Orlando resident of 23 years, and her family went on vacation to Asheville, N.C. Giorgio noticed signs welcoming people of all backgrounds and beliefs posted in the windows of various businesses across the city. Shop owners started displaying these signs over two years ago to encourage tourism following the passage of the controversial House Bill 2 in North Carolina, which requires certain public bathrooms to be designated for use by males or females based on their biological sex.

“The signs in Asheville moved me,” Giorgio said. “Love is the only weapon we can use to fight hate and these signs represented all the values I was raised with and am trying so hard to instill in my daughter.”


Giorgio recreated the signs, with help from friends, and launched a similar campaign, #LoveForAll (formerly #OrlandoForAll), one week after returning from vacation. She relies heavily on donations and support from residents to bring love first to Central Florida and now all over the country. In December of 2018, Giorgio and #LoveForAll received a grant from the Awesome Foundation to continue to produce posters and spread love.

“My signs may not solve all the problems in the world right now,” Giorgio said. “But they’re a tiny step in the right direction at a time when everyone is so divided and angry. I feel compelled to do something. My hope is to promote love and inclusivity one sign at a time and start a conversation that might one day help to bridge the gap that exists right now in this country. I want to be very clear that these signs aren’t politically motivated. Love is so much bigger than politics. And who doesn’t love love?”

The movement sparked similar initiatives with Giorgio’s assistance in Central and North Florida; Boston, Mass.; and several cities in California. Since last November, Giorgio began to reach out to businesses across the country and sends piles of the signs through the mail each week all over the United States. Giorgio hopes to place as many of these signs in businesses as possible, while opening up the hearts and minds of whoever sees them.