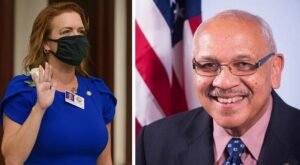 Representative Kristen Arrington, a Kissimmee Democrat, introduced HB 249, an Act relating to driver license and identification card gender designation. The companion legislation, SB 456 was filed by Senator Victor Torres, a fellow Orlando Democrat. This act would allow those who are non-binary to select a non-binary gender designation when applying for a driver’s license or ID card in Florida.

“Non-binary people in the state of Florida haven’t been able to obtain a driver’s license or ID card with an accurate gender marker that reflects their identity,” said Representative Arrington. “This bill puts us in line with the majority of the country by offering the gender marker options that are available on US passports. Almost 1,000 Americans move to Florida each day. Those who are non-binary who are moving to Florida are finding they are unable to get an ID card that reflects who they are.”

“Our laws frequently need to be updated to reflect societal changes and this bill allows Florida to keep pace with the national trend of recognizing the non-binary gender identification status for individuals,” stated Senator Torres.

Some Republican legislators argue there should be only two genders to choose from on the application, so it is not certain the legislation will gain any traction in Tallahassee.