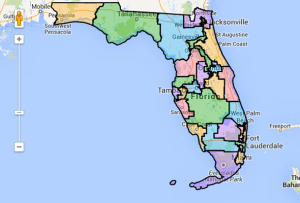 In a scathing opinion late on Thursday, Leon County Circuit Judge Terry Lewis declared that Florida’s congressional map drawn by the Florida Legislature and adopted in 2012, violated the state’s “Fair Districts” amendments.  Lewis said that legislators and their advisors secretly worked to protect incumbents, making a mockery of transparency and openness with regard to the re-districting process.

In Lewis’ 41 page opinion, he writes:

What is clear to me from the evidence, as described in more detail below, is that this group of Republican political consultants or operatives did in fact conspire to manipulate and influence the redistricting process. They accomplished this by writing scripts for and organizing groups of people to attend the public hearings to advocate for adoption of certain components or characteristics in the maps, and by submitting maps and partial maps through the public process, all with the intention of obtaining enacted maps for the State House and Senate and for Congress that would favor the Republican Party.

They made a mockery of the Legislature’s proclaimed transparent and open process of redistricting by doing all of this in the shadow of that process, utilizing the access it gave them to the decision makers, but going to great lengths to conceal from the public their plan and their participation in it. They were successful in their efforts to influence the redistricting process and the congressional plan under review here. And they might have successfully concealed their scheme and their actions from the public had it not been for the Plaintiffs’ determined efforts to uncover it in this case.

For the first time, a group of citizens has shown that with commitment and perseverance, they can take on the might and unlimited resources of the Florida Legislature and win by exposing what the judge calls ‘the secret, organized campaign to subvert the supposedly open and transparent redistricting process.’ ”

Judge Lewis’ ruling puts real teeth in the Fair Districts amendments that were passed so overwhelmingly by Florida voters. With many other states grappling with the cancer of gerrymandering, this nationally precedent-setting decision sends a clear message that triumphs in the name of fair and transparent government are possible. This is a thrilling victory for the people of Florida and for the open, fair and accountable government that for decades the League has worked tirelessly to promote.
To read Judge Lewis’ opinion in full, please click here.