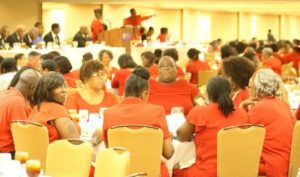 October 14 and 15th heralded the mid-year annual workshop for members of Jerusalem Grand Chapter, Order of the Eastern Star, State of Florida, Prince Hall affiliated.  The event was held at the Hyatt Regency Jacksonville Riverfront, located at 225 E. Coastline Drive in Jacksonville. The workshop convenes each year in effort to enrich and enlighten members with proper conduction of chapter business, tighten up skills of current members, and educate newly inducted members to the practices of the order.

On tap for the weekend beginning Friday were bestowals of Queen of the South and Amaranth degrees. Respectively. Those two degrees complete the degrees, which make up the whole of the Eastern Star. 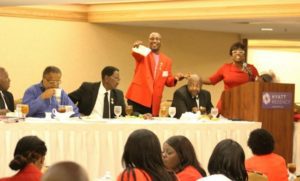 Hundreds of members from across Florida congregated in “Jax” for the annual event, which normally takes place in Orlando. The site for this particular workshop was but a few block from the Grand Lodge building on Broad Street. As could be expected, the Honorable Walter Gulley, Jr., The 18th Most Worshipful Grand Master for Prince Hall affiliated Masons in the State of Florida was also in attendance.

In his remarks, the Grand Master focused on education, awareness, and family. He challenged those in attendance to practice healthy lifestyle habits and encouraged members to hold one another accountable as sisters and brothers. The event was a family affair. 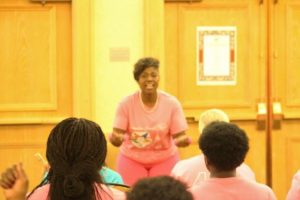 The theme for 2016’s workshop was: “It’s Our Time to S.H.I.N.E.” The acronym S.H.I.N.E. stands for (Spirituality, Health, Investment/Insurance, Nutrition, and Empowerment/Exercise).

To that effect, Saturday morning consisted of initiatives devoted to each of the letters in the acronym and included breakout sessions on: Diabetes; Hands-on CPR; Prostate Cancer; Financial Health; Breast Cancer; Fruit of the Spirit; The power of Prayer, and Investment and Savings.

In honor of the “Go RED” dress campaign for heart disease awareness, each member donned their most appealing RED attire (RED is also the color for one of the heroines depicted in the organization’s emblem). Hence, the banquet room for the venue was filled to the brim with the vibrant color of Electa.

Attendees whom answered questions correctly were awarded prizes of gift cards from various venues. Following the luncheon, Patrons and Associate Patrons (male members in leadership), attended a session devoted to proper implementation of their duties. 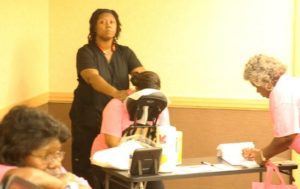 Mid-afternoon consisted of an all-around health initiative consisting of exercises, dance exercising, massages, and vendors with health focused presentations. The Grand Worthy Matron led one group of attendees at one end of the banquet room while dance exercise techniques were conducted at the other. All attendees were presented with a Pink Tee-shirt with the OES emblem and Breast Cancer awareness ribbon on the front. As such, the colors went from vibrant Red, denoting heart disease awareness to rich pink in a nod to Breast Cancer awareness.

A full day of lectures, workshops, exercise, and health awareness concluded with a reception will be held Saturday night. The semi-formal event featured the color Blue, symbolic of another of the OES heroines – Adah.

About the Order of the Eastern Star 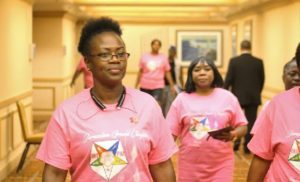 The main focus of the O.E.S. revolves around five heroines, four of which are mentioned at some point in the bible:  Adah, the daughter, Ruth, the widow, Esther, the wife, Martha, the sister, and Electa the mother.  Each member of the organization is charged with trying their best to practice the virtues exemplified by each of the five heroines to include: honor, fellowship, courage, faith, and love.

Each successive workshop adds to the prowess of the Centuries-old organization and its members.