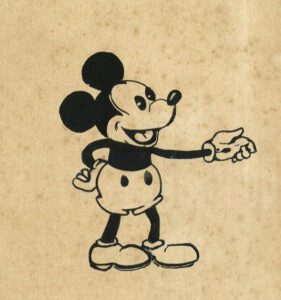 In an exciting discovery, a bold ink drawing of a figure that looks exactly like an early Mickey Mouse rendering was unearthed by an anonymous Florida collector. With trademark round ears, gloves, short pants and shoes, this smiling mouse extends a hand in a friendly greeting – bearing a striking resemblance to Walt Disney’s early depictions of the world-famous mouse. The drawing was featured in a November 1992 article in The Comics Journal.

The drawing was purchased in its frame at a Florida flea market from amongst the remnants of a South Georgia estate sale for $10. It is expected to receive bids over $1,000,000 million, according to the auction house.


On the back of the frame is written, “Son’s Baby Picture, 1926 & 1927, He loved it.” Opening the frame revealed there were Disney-esque family pencil sketches on the reverse. Upon researching the provenance, the finder was able to establish that the estate sale was held on behalf of a family with confirmable connections to Walt Disney.

The finder contacted Walt Disney archivist David Smith in August 1991 about the drawing and received the following response, “There is no way your drawing could be from 1926 or 1927 because Mickey Mouse was not created until 1928. It is probably not an ‘official’ Disney piece because the character has five fingers on the hand which is incorrect.” However, Walt Disney said himself that the five-fingered “bunch of bananas” hand was dropped in 1928 to facilitate animation and that he had personally stopped drawing or contributing any artwork around the end of 1926.

The collector then took the drawing to FSU forgery expert Francois Boucher. Although he did say he was not qualified to definitively state whether it was an original Walt Disney drawing, he believed that, “It’s certainly one of the very early drawings of Mickey. I think it’s a very good find.”

The collector contacted author and comic art historian Craig Yoe, who believed the sketches on the back of the piece were the unquestionable evidence of Disney’s hand, stating: “There are some incredible similarities between the drawings on the back and his high school pictures. Looking at what I’ve looked at, I would swear that the drawing on the back was by Walt Disney.” Yoe also noted the brush work and said that the work on the front “looks to be by the same person,” i.e., Disney.

Upon close inspection, this drawing is done in accord with Walt’s definitive commandment to all who would later animate this image: “Ears are to be drawn as circles – but not quite circles.” (See Ward Kimbell’s The Mystery of Mickey Mouse, Art and Antiques, November 1991) 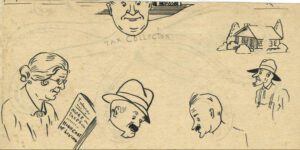 Go online to view the auction.