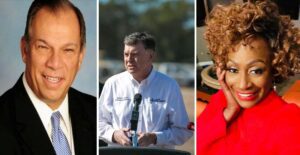 It was another lackluster Orlando Election Day as three City Commissioners were re-elected with low voter turnout. The incumbents provide Mayor Buddy Dyer a rubber stamp.

The most competitive race was actually in the district where I reside and vote, Orlando’s District 3. Incumbent City Commissioner Robert Stuart pulled it off against challenger Nicolette Springer and young progressive Samuel Chambers. While Stuart had the establishment support and Mayor Dyer behind him, Springer had progressive interest groups and local unions supporting her. She spent a lot of money leaving door hangers (I personally had about 5 really glossy ones on my door in recent weeks, yet none of her canvassers actually knocked to speak to me). I had another major issue with Nicolette Springer as a candidate, and it may have been what cost her a runoff election against the incumbent. Stuart ended up with only 465 votes more than Springer.


Back in August, I wrote to Springer as a voter in the district she wanted to represent and asked her for basic campaign issues and background on her run. I wanted to support her – I’ve been an advocate for change in Orlando. But what kind of change? Springer messaged back almost instantly saying she would email me “shortly.” I never heard from her again. I sent more messages trying to hear from the local candidate, but she was obviously getting bad political advice from someone. She would read the messages but felt like she didn’t have to talk to me. That told me enough. As I spoke to voters across the district about how she was campaigning, they were as turned off as I was. As a former Democratic precinct representative in this area and a former city candidate, it made no sense why Springer would flat out ignore a super voter, community advocate and local journalist. If a candidate doesn’t want support or votes, then they will not get them. Springer lost votes she absolutely needed and she can only blame herself. I’m not saying it would have changed her loss to a a victory, but when Robert Stuart ended with just 50.69% of the vote, it could have helped Springer force a runoff.

It showed me and other Orlando voters that Springer was more interested in playing dumb political games and following advice of politically immature advisers. Springer didn’t think she needed to earn my vote, or all the other votes I may have been able to influence, and she never even attempted to get to know me or what I may offer about the City of Orlando and District 3. After walking to my polling place yesterday, I ran into Springer who was there to wave a sign for a Facebook video. She awkwardly looked at me and then immediately at the ground. All she could muster was “is there a line inside?” to which I responded I was on my way in to vote. It was one last awkward campaign moment that proved to me she was not ready to be City Commissioner, and speaking to friends and neighbors last night, many agreed.

In District 5, Commissioner Regina Hill has proven once again she is dominant in local elections with extremely low voter turnout. The race was over when the absentee ballots were counted, as Hill is known to use ballot harvesting like Mayor Dyer. Shan Rose picked up endorsements against the incumbent, including the Young Democrats, but with less than 10% of the district voting, the status quo remains. To be honest, any challenge to Regina Hill would need to be more aggressive and call out the bad more directly, but it doesn’t seem like many want to jump in the mud with the Commissioner. So, Regina Hill is re-elected with huge margins. Expect more gentrification in west downtown.

City Commissioner Jim Gray barely seems to campaign and continues to win big in District 1. Commissioner Gray received 2,114 total votes, or about 62% of the vote. Surprisingly, his opponent Sunshine Grund, who has run for local office many times in recent years, got second place with just under 23%, or 774 votes, despite the fact she doesn’t really campaign either. Bill Moore did campaign but received 509 votes in District 1, or about 15%.

If candidates running against Orlando incumbents don’t make the aggressive and forceful argument that the City needs change, including with Mayor Dyer himself, municipal election results will continue to follow this pattern. Just more of the same in Orlando politics.