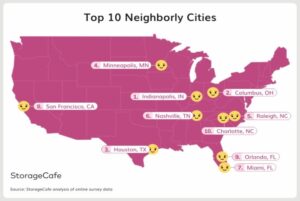 Small towns might be known for their friendly citizens living next door, but what about bigger cities? While some people barely speak to the people living next door, there are some cities in the U.S. where community and neighborliness prevail.

If you live in Orlando, you’re likely to have neighbors who look out for you, whether they do you a favor now and again or they volunteer in the community. So how did the City Beautiful rank?


In fact, Orlando ranks ninth for community neighborliness. And it’s not the only Florida city to make the top 10 list – Miami somehow ranked 7th.

In StorageCafe’s most recent report, they surveyed close to 11,000 people from across the US to find out the cities that best embody the neighborly spirit. The survey was based on four essential factors that pretty much epitomize a good neighborhood: satisfaction with neighbors, sense of community, involvement in community activities and willingness to recommend their neighborhood to others.

Some interesting the City Beautiful stats from the survey:

You can read the full report together with expert commentary on neighborly communities here.