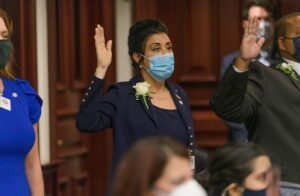 Vitiligo is a long-term, chronic medical condition that results in loss of pigmentation in patches on the skin, hair, eyes, and inside of the mouth. In the United States, around two to five million individuals are affected by this chronic medical condition. Approximately half of the cases were diagnosed during childhood thus requiring lifetime treatment.

“As someone who also has this disease, I want to thank those who are working tirelessly to produce real change in the lives of those with vitiligo and increasing awareness of this condition worldwide,” said Representative Daisy Morales. “I recently joined the conversation with the FDA, which is searching for effective medication solutions for people with vitiligo.”


Over the years, its purpose evolved from raising vitiligo awareness to also include recognition of the bullying, social neglect, psychological trauma and disability millions of people experience as a result of it. Representative Morales looks forward to championing the cause here in Florida.

“I look forward to us elevating the discussion on vitiligo symptoms, treatment, and research,” Rep. Morales shared. “With this, I recognize June 25th as ‘Florida Vitiligo Awareness Day.’”

World Vitiligo Day, first held in 2011, has become an annual global event. The campaign was born to bring this “forgotten” disease into the public eye, and to shine a light on challenges faced by those suffering from vitiligo—including roughly 6.5 million in the U.S. alone as of 2017, according to the Journal of Clinical and Aesthetic Dermatology.

Concerned citizens can learn more on the FDA’s program here.