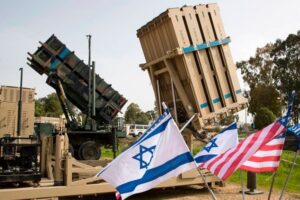 Despite some objections from the progressive squad members, the U.S. House of Representatives passed a supplemental funding bill for Israel’s Iron Dome missile defense system. The $1 billion Iron Dome resupply had overwhelming bipartisan support, including from Orlando members of Congress. The U.S. House stood with Israel, voting 420-9 to protect civilians from Hamas terror attacks.


“Earlier this year, the world watched Hamas terrorists fire 4,500 rockets at innocent civilians in Israel,” said Representative Ted Deutch, Chair of the House Foreign Affairs Subcommittee on the Middle East, North Africa, and Global Counterterrorism. “Iron Dome, developed and maintained with the help of the United States, intercepted thousands of those rockets and saved untold numbers of lives. This is a human rights and humanitarian success story, and I’m proud that the United States ensured that Iron Dome will be able to continue to save civilian lives.”

Earlier, Central Florida Representative Stephanie Murphy called out the far left of her party. “I’m outraged and dismayed that some of my colleagues object to helping Israel defend itself from rocket attacks by Hamas and Hezbollah terrorists,” Rep. Murphy said. “America must support our ally Israel.”

Orlando Congresswoman Val Demings, who is also running for U.S. Senate, also pressed her party for action. “The Iron Dome is critical to Israel’s safety and security, and directly tied to our safety and security,” Rep. Demings said. “Delays in funding are unacceptable. It should not be removed from this week’s bill and we should pass it immediately.”

“Today I proudly voted to fully fund Israel’s Iron Dome,” Rep. Murphy said. “Saving lives should not be a partisan issue. I urge the Senate to take this bill up for a vote immediately.”

“We resoundingly rejected lies about Israel and the lifesaving technology that protects Israelis and Palestinians,” Rep. Deutch added.

“Today’s vote demonstrated the overwhelming bipartisan support—and the vast support within the Democratic caucus—for our ally, Israel. I urge the Senate leadership to take up this standalone bill immediately and demonstrate, unequivocally, that both chambers of the U.S. Congress stand with the State of Israel.”