“It’s corruption in the most blatant terms,” former Congressman Alan Grayson told the West Orlando News. “I was kind of hoping he was going to run his campaign the same way,” he jokingly added, “because that money is not going to reach voters.”

Those are harsh words from one Democrat against another Democrat, but Florida’s 9th Congressional District is heating up as absentee ballots are out and primary voters are making their final decisions. Will Grayson return to Capitol Hill and unleash against a Trump administration which tends to only respond to big personalities and strong opposition? Or will Darren Soto keep his seat and continue building off his one-term success and developing his DC voice?

In the midst of that debate, voters now have to weigh in on the major allegations being made by the Grayson camp that raise questions, but do not seem to have the incumbent worried. Grayson blasted Soto in an exclusive phone interview with the West Orlando News during the primary, and over several weeks many questions were raised about Soto’s congressional campaign expenses, Soto paying for a labor union endorsement, and even questions about Soto’s party ideology and his evolution to becoming a progressive.


In reviewing the records, there is a long history of very curious payments out of Soto’s campaign. The most recent question relates to political operative Debra Booth, who is known locally for labor union fundraising and establishment support. She has worked recently for former State Attorney Jeff Ashton and Mayor Buddy Dyer, where she was instrumental in steering union support despite what is best for their workers and union members. Grayson says Soto paid for the AFL-CIO endorsement by buying off Debra Booth essentially. The endorsement payoff would be cheap, compared to all the labor contributions that would follow. The Soto campaign firmly rejects the notion Debra Booth works for the campaign, but they make regular payments to In Touch Strategies – where Debra Booth serves as CEO.

Debra Booth was head of the Central Florida AFL-CIO for nearly 16 years, according to her LinkedIn. Her In Touch Strategies, Inc. has received $1 out of every $8 spent by Soto’s congressional campaign this cycle based on FEC reports currently available through June. But Soto’s campaign claims they are paying for services rendered by Carl Booth, Debra’s husband. Carl Booth’s only trace on LinkedIn shows as retired from In Touch Strategies. This is what Grayson points to when he raises the question: what is Soto’s money paying for and getting in return?

Soto got the coveted AFL-CIO endorsement this year and was awarded it at their convention. Both Grayson and Soto fought hard for the labor union nod, as both have strong histories with union members. Grayson has the support of national labor figures like Richard Trumka and local union members and organizers. Soto has worked his relationships over years in the state legislature with state AFL-CIO leaders. But Grayson alleges the local fix was in with this endorsement because Soto started paying Booth’s operation to step in with her personal relationships at the top. Not so fast, says Soto’s campaign.

“Darren was honored to be the opening speaker at the Florida AFL-CIO Convention and to earn their endorsement based on his strong record on collective bargaining and workers’ rights,” Soto campaign spokesperson Harry Kruglik said. “Carl Booth’s In Touch Strategies assists with our field program.”

“If you wanted to bribe Debra, what’s the difference if you bribe her through her husband?” Grayson asked.

“Deb Booth does not work for our campaign,” Kruglik added. “Only Grayson could turn his rejection into a conspiracy theory and malign union members across this state at the same time.” 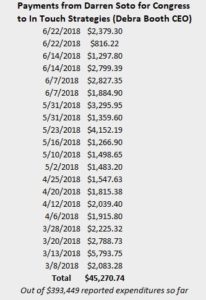 Soto’s campaign is clear that Carl Booth is the campaign employee and he has been paid nearly $50,000 through June as a “strategic consultant” according to FEC reports, and paid for “field services” according to Soto’s campaign. The campaign wouldn’t clarify further what exactly In Touch Strategies is providing in the primary. When pushed about where is the money going, the campaign repeated “field.” The campaign also denied that Booth was paying any other employees as a shield company, so the payouts have gone directly to In Touch Strategies alone. That’s a lot of money for “field work” for one person in just 4 months.

Grayson boasts about his grassroots field operation, which has been a full-time operation working the district leading up to the primary vote. He told West Orlando News he asked his staff what voters were saying and to ask if they had heard from Soto’s campaign team. “No one can do field work in secret, it doesn’t work by definition,” Grayson said. He calls Soto’s field effort “nonexistent.”

“You’re not allowed to pay people for endorsements,” Grayson said. “That’s ridiculous. This is a felony. There are people in prison for exactly this.”

In the back and forth, Soto’s campaign again dismisses any Grayson allegation. “We’re proud to have dozens of canvassers who have helped Darren knock on thousands of doors,” Kruglik said of Soto’s campaign grassroot efforts. But there are no signs of paid canvassers or phone bank field staff on the campaign’s financial disclosures. The Soto campaign wouldn’t comment on specifics for volunteers, but was confident in their efforts and response from constituents.

So there is some question as to why the lesser politically known Carl Booth (retired? apparently not) is being paid so much of the campaign’s money, especially with the direct connection to the active CEO and more politically known wife, Debra Booth.

As if that was not intriguing and heated enough, there’s another plot twist in this story. Debra Booth also previously worked for Alan Grayson as his District Director when he served in Congress. There’s no love lost between the two. Grayson openly refers to it as an “unsatisfactory relationship” and he ultimately terminated her employment. “What a tangled web we weave…” Grayson recalls. “It’s a tangled web.”