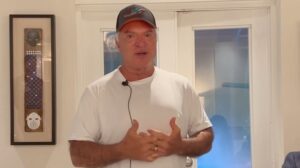 
“It’s the first time in four decades where I’m actually endorsing a Democrat for Congress in South Florida. And I’m doing it for a couple of reasons,” said Al Cárdenas, former chairman of the RPOF. “The first reason is that I have not, in these forty years of involvement in politics in America, seen my country face such dire straits as it’s facing now. So, I have decided that loyalty to my country and loyalty to what’s right is really more important than the loyalty I’ve had to my party for forty years. And, when it’s important and necessary, I’ll deviate from that loyalty to do what’s right for America. And in this particular race in South Florida, it’s important to elect Annette Taddeo. I’ve known her in many of her roles, and I know how she thinks. I know that she puts her country and her state above herself. And to me, that’s now a precondition to supporting anyone running for office. ‘Is your country more important than your particular political career?’ And I know for Annette, it is. And so, I’m here to support her, and I’m proud to support her.”

Al Cárdenas served two terms as chairman of the RPOF, was appointed a member of the Executive Committee of the national Republican Party, and also served as the chairman of the American Conservative Union. Al Cárdenas’ endorsement comes as Fox News reports that Rep. Kevin McCarthy and the GOP is planning to spend up to $2 million in the race to re-elect Republican Rep. Maria Elvira Salazar.

“Al Cárdenas’ support for our campaign demonstrates how critical it is to restore dignity and honor to the office of Florida’s 27th Congressional District,” said Senator Annette Taddeo. “From Claude Pepper to Dante Fascell to Ileana Ros-Lehtinen to Donna Shalala, this seat has always been held by a leader who has put the interests of the district’s constituents ahead of their party. When elected this November, I will restore this same type of leadership that has been sorely lacking under the current incumbent.”


In addition, Cook Political Report and Politico just changed its FL-27 rating towards Senator Taddeo’s favor and The Economist has already called this toss-up race one of the tightest races to watch in Florida.

This endorsement shows Senator Taddeo is building a strong coalition of Democrats, Independents, and Republicans to flip this district blue. Senator Taddeo’s campaign said they have been racking up endorsements from Democratic and Republicans elected officials, major unions and national and local organizations, and that her race is part of the selective DCCC Red to Blue List.