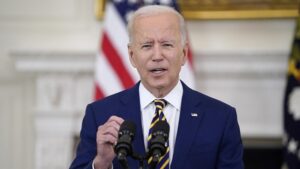 As crime and gun violence increases across the country, President Joe Biden and Democrats have started to acknowledge the problem by offering an anti-crime plan. U.S. Representative Val Demings, who is the former Orlando Police Chief, also weighed in, saying she is “strongly supportive” of efforts to reduce violent crime in neighborhoods.


“Nothing is more important than the safety and security of our communities, and I strongly support decisive efforts to reduce violent crime in our neighborhoods,” said Rep. Demings. “As a Chief of Police, we focused intently on violent crime, using targeted resources, violence prevention strategies, and community engagement to successfully reduce violent crime by over 40%.

“These merchants of death are breaking the law for profit,” Biden said. “If you willfully sell a gun to someone who’s prohibited, my message to you is this: We’ll find you and we’ll seek your license to sell guns. We’ll make sure you can’t sell death and mayhem on our streets.”

But Republicans are criticizing the plan for the focus on guns, in addition to the Democratic push to “defund the police” which has divided the party and made the issue had for Democrats to articulate to the public. “This is not a time to turn our backs on law enforcement,” President Biden admitted while saying he wants to increase efforts to reform policing.

“Our legislation, the American Rescue Plan, will be funding vital new community violence prevention,” added Demings. “Lawbreakers must be held accountable, but we cannot simply react to crime, trying to arrest our way out of this problem. We must be proactive and take necessary action to stop crime from occurring in the first place. We must ensure that law enforcement has the critical resources needed to fight crime, keep communities safe and keep our officers safe. At the same time, we must address the social ills that plague communities.”

In rolling out the anti-crime plan, the Biden administration once again used the “root causes” term, saying it “attacks the root causes – including by addressing the flow of firearms used to commit crimes.” The Democratic President admits there is an “epidemic of gun violence in this country.”

“Our plan does this, and despite every Republican voting against this critical funding, I believe that supporting our local police and investing in jobs and opportunity will have a real impact to reduce crime and keep us safe,” Demings said. “As a former police chief, I know this approach can work because I have seen it work.”

For more on the plan from the White House, click here.