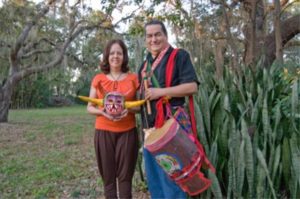 The Florida Folklife Program and Crealdé School of Art recognized 2017 Florida Folk Heritage Award recipients David Peñaflor and Lilly Carrasquillo in a special ceremony this month. The ceremony highlighted the couple’s contributions as advocates of Latin American culture, art and music in Florida.


Marilia (Lilly) Carrasquillo was born in San Juan, Puerto Rico. At age 18 she began making papier-mâché vejigante dolls and masks, and since arriving in Florida her vejigante masks have been featured in several exhibits. Ms. Carrasquillo has been a folk artist and arts educator for over 40 years. Since 1987, Carrasquillo has worked with Orange County Public Schools (OCPS) Migrant Education Program and the Farmworker Association of Florida, building traditional arts into curriculum and using folk arts to engage migrant children and families with their own cultural heritage. She participated in the 2005 Folklife Apprenticeship Program to teach vejigante mask making, and is dedicated to creating, teaching and inspiring others.

Rey David Peñaflor Valdez grew up in Cuernavaca Morelos, Mexico, where he completed his business and identity & culture studies. He began his artistic career in 1977 as director of Huitzilin, a group that presented regional folk music and dances. From 2002 through 2008, he served as Coordinator of Cultural and Educational Programs at the Mexican Consulate, where he met Lilly Carrasquillo. The couple married, and together have presented at festivals, led workshops for children and teachers, and created a folk arts curriculum as part of the Viva Florida 500 statewide initiative. With unwavering enthusiasm, Lilly and David have made tremendous contributions to preserving traditional culture from Pre-Hispanic Mexico to Puerto Rico.

“It is a huge honor for Crealdé of School of Art to host the 2017 Folk Heritage Life Award Event here in Winter Park. This year’s recipients, David Peñaflor and Lilly Carrasquillo, have been part of the Crealde family of artists for many years,” said Peter Schreyer, CEO and Executive Director Crealdé School of Art. “Their annual kid-folk workshop and performance at the Hannibal Square Folk and Urban Art Festival introduce new audiences each year to the art and culture of Puerto Rico and the Mexican Aztec people. The cultural impact of their teaching and community involvement throughout Central Florida is simply immeasurable. It is privilege to live in a state where such efforts in cultural diversity are being recognized and celebrated.”