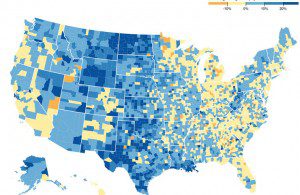 In the Tampa Bay area, Pinellas and Hillsborough counties saw a slight uptick in wage growth, 2.8 and 2.7 percent, respectively, during that decade.

Nationwide, states that show booming wage increases were Texas, Oklahoma, Colorado and the Dakotas, where the energy sector is dominant.

From Washington With Love: Homeownership Sinks To 48-Year Low As Rents Soar

Get Used To It: Florida’s Low-Wage Job Growth Is Here To Stay