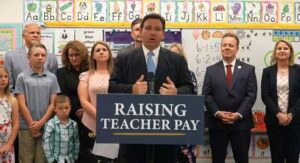 As inflation grows and despite investments by the legislature, Florida’s teachers remain stuck near the bottom nationally when it comes to average pay, according to new figures released by the National Education Association. With an average teacher salary of $51,009, Florida ranks 48th in the nation, according to the NEA report. So much for teacher appreciation in the Sunshine State.


“We all want our students to get a high-quality education, and we know it takes qualified teachers and staff to make that happen. Florida has a severe shortage of educators, due in large part to low pay,” said Florida Education Association President Andrew Spar. “We’re in a double bind in Florida. Even when increases are funded, Tallahassee has tied districts’ hands with more than 20 laws affecting pay. The upshot is that while salaries improve for new teachers, experienced educators are left behind. Improving pay for all career levels would help keep experienced professional teachers in front of our students and attract new people to the field.”

The NEA spells out the salary situation in a summary: “In 2020, Florida enacted a plan to increase the starting salary for teachers to $47,500 over a period of years. As a result, Florida saw its ranking in starting teacher pay improve from 30th to 16th among the 50 states and DC. However, the new Florida law did little to help experienced teachers and will leave them behind for years to come; and Florida’s average teacher salary improved by only one spot, from 49 to 48, in the state rankings.”

Governor Ron DeSantis announced $800 million in this year’s budget to raise minimum teacher pay and increase veteran teacher salaries in Florida. The $800 million is a $250 million increase over last year’s funding. It is the third year in a row for increases in teacher pay.

In real dollars, Florida educators are earning less now than 10 years ago. NEA found that, adjusted for inflation, Florida’s average teacher salary for 2020-2021 was 10.26 percent less than in 2012-2013. As has long been true, teachers in Florida’s nearest neighbors are better paid, with Alabama ranking 35th and Georgia at 21st for average pay.

“Over the last three years, we have worked hard to increase teacher pay,” said Gov. DeSantis. “We have invested more than $2 billion in teacher pay, and with rising inflation, this could not come at a better time. This will help Florida to recruit and retain great teachers.”

The NEA released four reports on education funding and salaries:


To view more, check out the NEA Educator Pay reports.