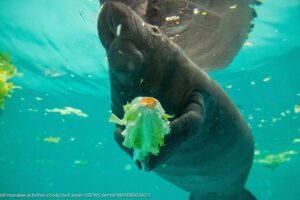 Florida manatees, along with Bear Warriors United, sued the Florida Department of Environmental Protection for violating the Endangered Species Act by allegedly engaging in irresponsible regulatory practices that have caused manatee starvation in the northern Indian River Lagoon.

Manatees are a threatened species. The complaint alleges that DEP, the state agency responsible for regulating, permitting and authorizing sewage disposal via septic tanks and wastewater treatment plant infrastructure, has allowed nitrogen-laden sewage to pollute the northern Indian River Lagoon, causing manatee deaths by obliterating the seagrass and and other macroalgae food sources manatees require for survival.


“A record-breaking 1,100 manatees died last year, mostly due to starvation. These manatees’ deaths are on the hands of our state regulators, the very people Floridians entrust with protecting threatened species and the quality of our waterways.

“While the Florida Fish and Wildlife Conservation Commission throws tons of lettuce at our starving manatees as a bandaid approach, we must hold the Department of Environmental Protection accountable for these deaths,” said Katrina Shadix, Executive Director of Bear Warriors United, a non-profit organization.

The lawsuit filed in the U.S. District Court for the Middle District of Florida, seeks to compel DEP Secretary Shawn Hamilton to cease violating the Endangered Species Act, and it seeks injunctive relief to protect the manatees in the northern Indian River Lagoon.

“All that human sewage has to go somewhere, and our government says it’s okay to put it in the lagoon. State law allows this. State law expressly authorizes the use of the IRL as a toilet,” said Lesley Blackner, who is representing Bear Warriors United.