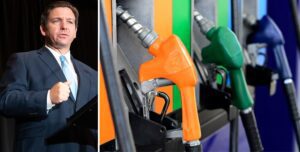 As gas prices continue to break records across the country, the Tampa Bay Times is reporting that Governor DeSantis’ office delayed a gas tax holiday until just before Election Day. Florida Democrats are jumping on the report, hitting the Republican Governor for not helping with the pain at the pump in order to score political points just before his re-election.


“Days after DeSantis publicly called for a five-month suspension of Florida’s gas tax last year, his team drafted legislation to delay the break until October,” the Tampa Bay Times wrote.

After blaming President Joe Biden for rising gas prices late last year, Gov. DeSantis called for gas tax relief but the Republican legislature was more resistant. Florida Republicans say it has nothing to do with the upcoming election, but the Democrats disagree.

“While gas prices in Florida hit another record high, Floridians are stuck paying an extra 25 cents on every gallon so that Ron DeSantis can time a gas tax holiday around Election Day,” said Florida Democratic Party spokesperson Kobie Christian. “Voters should remember that every time they’re feeling pain at the pump, it’s because Governor DeSantis is hoping it helps his re-election campaign.”

Floridia voters (and tourists) will enjoy a one-month Fuel Tax Holiday from October 1st through October 31st, saving Floridians $200 million by lowering the price of gas by 25.3 cents per gallon, according to tax relief legislation signed by Gov. DeSantis.