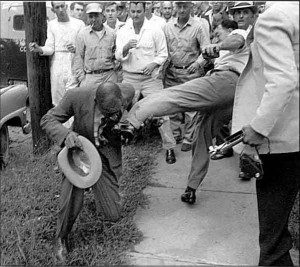 The Democratic Party, over the past two election cycles, has spent miniscule amounts of its resources with minority-owned firms, according to the findings of a new report undertaken by PowerPAC+, a Washington-based political action committee, that works to build the political power of America’s multiracial majority.

Based on a review of the Federal Election Commission filings from 2010 and 2012, the ‘2014 Fannie Lou Hammer Report found just $8.7 million of the $515 million paid out in contracts went to minority-owned or firms which had a minority principal.

The obvious lack of diversity among the Democratic Party’s paid consultants is an age-old one, which is yet to be addressed.

In releasing the report, Steven Phillips, Founder and Chairman, PowerPAC+, pointed to the small number of Democratic consultants even though people of color comprised 45% of Democratic voters in 2012.

“50 years ago, Fannie Lou Hamer and the Mississippi Freedom Democratic Party challenged the Democratic Party to embrace people of color as a core component of its electoral coalition. 50 years later, significant progress has been made, but there remains no institutional mechanism within the Party to monitor, review and recommend additional efforts,” Phillips writes in the forward of the report.

Phillips continues: “The need for such a mechanism is particularly urgent today given both the country’s rapidly changing demographics… In fact, the election of a Black President may have lulled some Democrats into complacency about the Party’s vulnerabilities. Now is no time for self-congratulation.”

“It’s time we start to see race as the way to win, and invest our Party resources appropriately to help ensure victory at the ballot box,” he concludes.