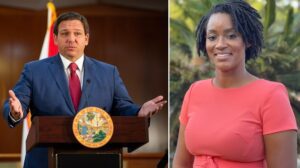 Democratic state legislators are blaming Republican Governor Ron DeSantis for rising rents they say are pushing Floridians to the breaking point. Florida has been a state facing an affordable housing crisis for decades and it has reached a critical threshold since the pandemic. Rent has doubled with Florida holding 10 out of the top 15 most unaffordable rental markets in the country.

Florida Democrats say “rents have risen by over 20% all over the state while the Republican-controlled government has stolen more than $2.3 billion from the state affordable housing trust fund since 2001. All the while, self-serving legislative leaders work to give away billions in corporate welfare and pass legislation allowing predatory landlords to squeeze more hard-earned money from their tenants.”


Jacksonville State Representative Angie Nixon recently spent the day working to secure emergency housing funding for dozens of local families evicted with only a two-day notice. After coordinating with the new property owners, they have agreed to provide $500 stipends per family for rental deposit assistance. Families will be allowed to remain housed on the property for a limited time while they search for new homes. Current tenants will also be provided first right of refusal with regard to returning to the remodeled rooms after completion.

“I’m happy I was able to get these families the help they need but sadly, all over the state of Florida, folks are at the breaking point, losing their homes with few alternatives. Meanwhile, Governor DeSantis does not care and is too busy campaigning for president across the country,” said Representative Angie Nixon. “He doesn’t have a solution to the housing crisis and instead chooses to fight over nonexistent problems. This is shameful– Floridians deserve better than this. They deserve to know that if they work hard, they can afford a roof over their heads, no matter who they are or where they live. Governor, do better.”

Just before the 2022 legislative session, Democratic legislators urged Governor DeSantis to declare a housing state of emergency. No real solutions have been prioritized by the GOP-controlled Legislature to date, and Governor DeSantis has continued to side-step the issue.

“We asked Governor Ron DeSantis to declare a housing state of emergency last year – and since then the situation for Floridians has only gotten worse,” stated Orlando STate Representative Anna V. Eskamani. “Rent increases of 20, 30 and 40 percent have become the norm, with families facing evictions and even homelessness. With federally funded rental assistance programs no longer accepting new applications, now is more important than ever for our Governor to heed our concerns, and act.”

Democrats put forward numerous proposals to aid renters that were filed during the 2022 session to be considered during the special session that would provide housing security for children, stabilize rent, protect against toxic mold, restore local governmental freedom to do what’s best for their renters in their communities, and more.

“We’ve called for common sense measures like rent relief, fully funding the affordable housing trust fund and more,” Orlando State Representative Travaris McCurdy added. “The Florida Legislature has failed the hard-working people of this state by passing government overreach laws to control who we love, what we read, how we vote, and what women can do with their own bodies. If Governor DeSantis and his accomplices spent half as much time working on the fact that Floridians can’t afford Florida, we’d all be in a much better place right now.”

In April, legislative Democrats sent a letter to Governor Ron DeSantis asking that he expand the call for the special session on property and homeowners insurance to include proposals that would provide real relief to renters throughout the state. While finding real solutions that help homeowners, rather than special interests, for the state’s collapsing property insurance market is vital for the people of Florida, it is only one issue contributing to the ongoing housing crisis impacting workers and seniors struggling to keep a roof over their heads.