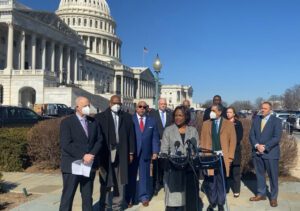 Realizing that increasing violent crime is becoming a major issue in American politics, U.S. Representative Val Demings, who is running for Senate, joined with colleagues and law enforcement representatives to speak out on the national increase in violent crime and the need for leadership at all levels to keep communities safe. Rep. Demings, a former 27-year law enforcement officer and Chief of Police for the Orlando Police Department, declared that reducing violent crime needs to be the top priority moving forward, along with keeping guns out of the wrong hands.

In what could be a political shift in messaging for Florida voters in a general election, Rep. Demings openly says she wants to invest in local police departments and “fund the police.” While it may help against a potential campaign against Republican Senator Marco Rubio, it may also create tension with some parts of the Democratic left and activists. The messaging shift confirms Democrats are worried about the “defund the police” narrative that took hold on the left and the damage it has done with some voters.

“We must invest in our police departments,” Rep. Demings said. “When we take the time to talk to communities, particularly those in high crime areas, they say ‘we want to fund the police.’ In Congress, we spend a lot of time and energy on issues that simply don’t matter. We should all be able to come together on this issue. Public safety is the foundation on which we build great communities. Is anyone really opposed to getting more murderers off our streets? I thank all of my colleagues and partners in law enforcement for joining us today on this important effort.”

Many law enforcement leaders called for more support and assistance to stop the violent crime surge. But they also credited Rep. Demings.

“My own police officer, Officer Keona Holley, was killed in December after being ambushed in her patrol car while serving her community,” said Baltimore Police Commissioner Michael Harrison, representing the Major Cities Chiefs Association. “According to the Law Enforcement Officers Memorial Fund, twelve other officers lost their lives in January after being shot, and this must stop immediately. Local law enforcement officers continue to work tirelessly every day to keep their communities safe. However, we need help from our leaders in Washington. On behalf of the Major Cities Chiefs Association I would like to thank Representative Demings.”

“[Representative Demings] has been an FOP Member for many years and as a working street cop brings a knowledge to Congress that is so valuable to our profession,” said Fraternal Order of Police President Patrick Yoes. “Her experience and background in addressing the nation’s skyrocketing crime rate – she knows how to protect a community because she’s done it, and she’s worked a beat and worked every position up to Chief. She knows that violent crimes, homicides, shootings, are the deepest wounds in our communities.”

The National Organization of Black Law Enforcement Executives also called for finding solutions to address violent crime. “This is an American issue, not a Democratic issue or a Republican issue. And it is a people issue,” said Executive Director Dwayne Crawford. “We need all of our elected officials to put America first and say collectively, we’ve got to find solutions of how to address this issue of violent crime.”


“Our number one priority has to be the reduction of violent crime,” Rep. Demings said. “And we also have to make sure that we keep crime guns out of the hands of people who should not have them in the first place. We have to invest in those social ills that cause decay in communities in the first place. It’s about investing in our schools today, so we won’t have to invest in our prisons tomorrow.”

Rep. Demings previously introduced the Violent Incident Clearance and Technological Investigative Methods (VICTIM) Act, legislation to help law enforcement departments close murder and violent crime cases by hiring, training, and retaining detectives and victim services personnel. She also cosponsored the Invest to Protect Act of 2022, which would establish new federal grants to local police departments with fewer than 200 officers. She has also led on The Law Enforcement Protection Act to protect law enforcement officers from concealable armor-piercing weapons, and the Protecting Our Communities Act, to protect law enforcement officers and the public from high-powered, rapid-firing and untraceable weapons.