The woman who struck and killed a toddler while driving on Daytona Beach, after the child darted into the path of the vehicle will not be charged.  Florida Highway Patrol said today that the investigation into the Ellie Bland case has been completed and closed. 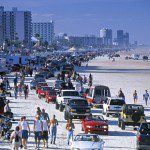 On March 20, earlier this year, 4-year-old Ellie Bland from England, who was on Daytona Beach, pulled away from her Uncle’s hand and darted into the direct path of a Lincoln driven by Barbara Worley, 66 years, of Georgia.

According to witnesses, the front of the car stuck Ellie.  Although Worley immediately stopped the vehicle, she panicked after bystanders began yelling at her and blowing their horns for her to stop, and the her car lunged forward, driving over the child.

FHP said that traffic homicide investigators determined Worley was not at fault in the crash.  Additionally, they said that no charges will be filed and that the case is now closed.

Beach driving has had a long tradition in Florida and dates back to the horse and buggy era.