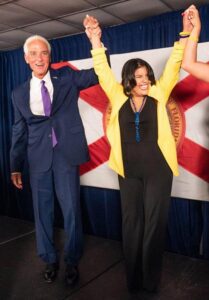 Fresh off his victory in the Democratic Party primary, Charlie Crist announced former Teacher of the Year Karla Hernandez as his running mate and pick for Florida Lieutenant Governor.

The Crist campaign pointed out the announcement of Hernandez was made “standing alongside Floridians from all walks of life, Democrats, Republicans, and Independents,” in a coalition they say can defeat popular incumbent Governor Ron DeSantis. Democratic leaders across the state have already applauded the selection by Crist, including Orlando State Representatives Anna Eskamani and Carlos Guillermo Smith.


“I could not be more proud and excited to announce Karla Hernandez as my running mate in our fight to defeat Ron DeSantis and build a Florida that truly works for all Floridians,” said Crist. “It’s time to send a teacher of the year to Tallahassee. Karla’s story is a Florida story – a first-generation American who dedicated her life to service, she became a Miami-Dade public school teacher, and a fierce defender of working Floridians and a woman’s right to choose. She is exactly who Florida needs to defeat Ron DeSantis and bring the sunshine back to the Sunshine State.”

Hernandez is a first-generation American who has dedicated her life to serving Floridians, spending over 10 years as a public school teacher instructing children with special needs. Hernandez has been recognized for her extraordinary achievements in the classroom and was selected as Hialeah Middle School’s Teacher of the Year in 2010.

“I am deeply honored to be joining this ticket — it’s the opportunity of a lifetime to fight for Floridians as their next Lieutenant Governor,” said Hernandez. “Like Charlie, I come from a family of immigrants, and have been blessed by the opportunity of the American Dream right here in Florida. But right now, we have a governor who attacks teachers and bullies students, who attacks women’s right to choose, and who attacks anyone that disagrees with him. Unlike Ron DeSantis, Charlie listens, he cares. And so do I. That’s why we will defeat Ron DeSantis in November.”

Born and raised in Miami to immigrants from Honduras, Hernandez is the first person in her family to graduate from college. Her father worked picking tomatoes in the Everglades before becoming a carpenter and labor leader.

According to the campaign, Hernandez has served as the President of the United Teachers of Dade, the largest teachers’ union in the southeastern United States, and the fourth largest in the country. As President, she helped mobilize the educators and Miami-Dade community members to successfully pass an initiative to give public school teachers a salary raise and improve security in schools.

“Karla, like Charlie, has a heart of gold and is exactly who we need to defeat DeSantis,” said Broward School Board Member Sarah Leonardi. “She was Teacher of the Year for her work with special needs students, a fighter for women’s right to choose, and a champion for everyday working Floridians. I’m thrilled with this ticket and proud to support their efforts to defeat Ron DeSantis.”

In addition to her work fighting for better public schools, Hernandez is a fierce advocate for reproductive rights. She currently serves on the Executive Board of Ruth’s List, where she works to elect pro-choice women across Florida. Karla Hernandez also serves as Vice President of the AFT and on the State AFL-CIO Executive Board.

“Karla’s story is the story of the American Dream and an inspiration to Floridians all across our state,” said Alexandra Mandado, President, Planned Parenthood of South, East, and North Florida. “As the daughter of Honduran immigrants, a first generation American, and the first in her family to graduate college she represents the story of so many Floridians. Thrilled to support this ticket to defeat Ron DeSantis in November.”


“Charlie made a phenomenal pick for Lieutenant Governor,” said Rep. Eskamani. “Karla is well-beloved in the education community as Teacher of the Year at Hialeah Middle School and is an advocate for workers rights and reproductive health. Together, Charlie and Karla will win this election in November and build a Florida that leaves no one behind.”

“Karla’s story is a Florida story — she’s a first generation American and the daughter of Honduran immigrants. She has fought on behalf of teachers, defended a woman’s right to choose, and uplifted working Floridians.” said Rep. Guillermo Smith. “I know she’ll be a fighter for all of the people of Florida.”