WHAT: Approximately 400 youth and adults will gather to keep the light of hope burning for homeless youth as part of the 20th Annual Candlelight Vigil for Homeless Youth hosted by Covenant House Florida. 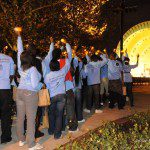 At Walt Disney Amphitheater, the vigil will include music, inspiring words from teens and supporters, and a candle lighting ceremony.

Starting in the month of November, Candlelight Vigils will be organized by churches, colleges and service organizations in partnership with Covenant House International.  In addition to the Orlando event, vigils will be held across the United States and internationally.

Covenant House Florida opened in Fort Lauderdale in 1985 and expanded to Orlando in 1995.  Since its opening 25 years ago, the organization has served more than 35,000 teens via street outreach, crisis shelters, transitional housing projects, and walk-in and aftercare services, making it one of the largest private agencies serving runaway and homeless youth in the State of Florida. It is part of an international mission with programs in 20 cities in the United States, Canada, Honduras, Mexico, and Nicaragua. The agency relies primarily on support from private individuals and organizations—not on tax dollars—to meet the multiple and complex needs of homeless youth.  For more information about Covenant House Florida, visit www.CovenantHouseFL.org.