Please see updates below, including photos of the weapon and official OPD updates, as this was a breaking news story

When traveling to or from the “happiest place on Earth,” you don’t expect to face a gunman. Right now Orlando International Airport is facing a security lockdown, as police respond to reports of an armed man inside the rental car section near one of the parking garages. There are also major traffic issues entering the airport right now as a result of the ongoing situation.

The incident appears to be contained to the terminal – Level 1 A-side, rental car area. There is a heavy response from local law enforcement. Police remain in a standoff with the armed man.

Of course airport officials will want to minimize this incident, as Orlando nears one year after the Pulse shooting, reports of an armed madman in the airport will not help with tourism. Suspect is Michael W Pettigrew, 26.

UPDATE: Airport officials say gunman is cornered, but not arrested. SWAT vehicle is making its way through traffic. Orlando Airport officials advise: “Entrances open but congested.” However, the Florida Highway Patrol warns, “avoid MCO. This is still an active scene with police activity. There has been no opening of this scene.”

OPD crisis negotiators did a phenomenal job. Suspect is Michael W Pettigrew, 26. At 7:28 OPD was alerted to a disturbance in the rental car area at MCO. Officers made contact with a black male holding a gun. The suspect pointed the gun at officers and said “shoot me, shoot me!” said OPD Chief John Mina. Police say the suspect was in mental distress, and there was no rush to arrest him.The suspect is a former Marine armed with a simulated firearm, Orlando police said.

The situation is over. 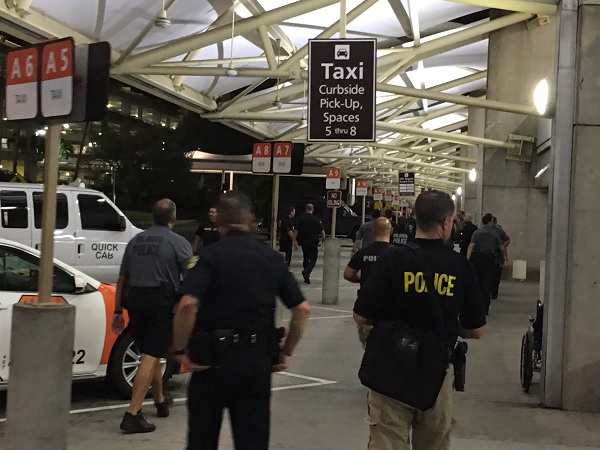 This is a breaking-news story. Check back for updates.