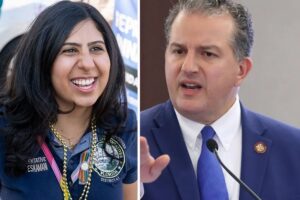 In tough remarks delivered to the Florida Sheriffs Association, Florida Chief Financial Officer Jimmy Patronis singled out Orlando State Representative Anna Eskamani for both her actions against law enforcement and her ambition for higher office. CFO Patronis blasted Eskamani indicating she had “no business being in elected office,” but also declared Republicans and apparently law enforcement will need to stop her from rising in state politics. She doesn’t seem too worried about their concerns.


“I’m concerned that certain anti-police elements are beginning to take roots in the political institutions of our state,” Patronis told the Florida Sheriffs Association. “For example, last summer Representative Anna Eskamani proposed ‘Divest[ing] in Law Enforcement’  and argued that funding police ‘threatens communities!’ Moreover, when Orange County was considering increasing its budget $15 million for the Sheriff’s office, Eskamani railed against the proposal.”

Patronis then riled up the crowd of law enforcement officers, directly spelling out what he views as Eskamani’s radical positions against them.

“That’s you – the people in this room,” he said. “You are now not just a target for criminals but also elected officials. They are coming for your jobs and in some instances, your badge. It’s time we fight back. Enough is enough. In Tallahassee there are even whispers that Eskamani has her eyes on the Governor’s Office.”

CFO Patronis then declared: “We cannot let that happen!”

Eskamani responded on Twitter and likely enjoyed seeing Patronis scared about her potential to run for Governor. “Nice to know I live rent free in Jimmy Patronis’ head,” she tweeted. “He’s attacking me via a speech at the Florida Sheriff’s Association — spreading disinformation and proving how afraid the Florida’s GOP leaders are of me. If only our CFO attacked rising property insurance rates w/the same fervor!”

In previous tweets, Eskamani had already reminded her followers that Patronis’ re-election was coming up in 2022, along with all other statewide officials.