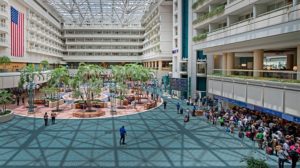 
From 2009 to 2016, international passengers arriving at Orlando International Airport grew by 89%, from 1.49 million to 2.83 million. However, the Greater Orlando Aviation Authority reports that over the same period, Customs and Border Protection Officer staffing levels have remained flat at the airport’s two Federal Inspection Stations. Even with maximum number of personnel in the facilities, the arrivals hall quickly overflows during peak times, forcing passengers to remain on aircrafts until previous arrivals have cleared Customs and Immigration.

“Orlando International Airport is one of the nation’s best ports of entry, and Orlando is the number one visitor destination in the U.S. As we continue to grow, it’s vital that we maintain safety staffing to meet increased passenger volume,” said Rep. Demings. “I urge Customs and Border Protection to once again reverse this ill-considered move and ensure that Central Florida continues to have the level of staffing necessary to ensure speedy travel and necessary security for all passengers.”

Despite this existing shortfall, and despite rolling back earlier attempts to remove officers, it was recently announced that additional Customs and Border Protection officers from Orlando International Airport and Port Canaveral could be assigned temporary duty at points of entry and reassigned to the Southwest border.

“Representatives Demings, Soto, and I have consistently told CBP that transferring officers from Orlando International Airport to the Southwest border is a mistake,” said Rep. Murphy. “These officers are needed at the airport to keep the public safe and the economy moving.  As Orlando’s representatives in Congress, we will continue to do everything possible to ensure Orlando International is fully staffed given that the airport is the busiest in the state and about to enter peak travel season.”

“We’ve seen overwhelming support for the CBP officers at OIA from our community, including repeated pleas from the Central Florida congressional delegation to at-minimum halt transfers,” added Rep. Soto.