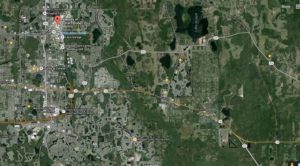 Two weeks ago, Orange County Commissioners voted 4-3 to approve changes to the county’s comprehensive land-use plan in order to allow controversial development projects in the rural Lake Pickett area. Commissioners Ted Edwards, Bryan Nelson, Scott Boyd and Victoria Siplin voted for the project, while Mayor Teresa Jacobs and Commissioners Pete Clarke and Jennifer Thompson voted against. The vote paves the way for development east of the Econlockhatchee River, as developers plan to build 4,000 homes in the Lake Pickett area including 2,000 homes as part of the controversial “The Grow” development.

More than 90 people provided public comment for the hearing, which lasted more than 7.5 hours. Residents have been fighting against sprawling urban development in the area for years. It is clear there are many issues involved with extending the Urban Service Area across the Econlockhatchee River. But this time, Orange County Commissioners ignored community concerns and voted for the development. It now goes to the state for review before a final vote at the Board of County Commissioners.

Commissioner Ted Edwards, whose district includes the Lake Pickett area, rejected the view that what is rural should stay rural. If that concept held, “we wouldn’t have UCF, we wouldn’t have Research Park, we wouldn’t have Disney,” Edwards said. He even criticized Mayor Jacobs for her opposition of the Grow project.

But Edwards is in the middle of a contested re-election bid, with all of his opponents taking aim at his latest controversial vote.

“This vote of the county commission and the entire flawed process leading up to it are just another example of how far we’ve come from representative government in Orange County District 5,” said candidate Timothy McKinney. “Commissioner Ted Edwards ignored the will of 99% of the residents and still believes he has no accountability because the special interests have poured hundreds of thousands of dollars into his campaign. The voters on August 30th have other plans.”

“We fought long and hard ahead of the vote and stood up for the people until 2am to prevent approval of urban sprawl in East of the Econ,” candidate Emily Bonilla said. Bonilla has been organizing with residents and the organization East of the Econ since 2013. “Unfortunately, we did not count on two Commissioners to betray the people of Orange County by uniting with my opponent Ted Edwards and the developers to obtain the necessary votes for the project’s approval.”

Challenger Greg Eisenberg took aim at Edwards and other candidates in the race. “While I do not entirely agree with the motivation surrounding the decision last night, deciding to cross the Econ is not entirely negative,” he said. “We have residents in Wedgefield that do not have access to clean water, and we need a sustainable solution. The only way to do this is to extend county water piping to these residents. While other candidates in my race have sworn to solve the problem, they were really just pandering to no end; by speaking against crossing the Econ but promising clean water to the residents in Wedgefield.”

“The difference between myself and our current commissioner is that I would only cross the Econ for the purpose of clean water, whereas he made his decision with only the interest of developers in mind,” Eisenberg added.

It was not just the candidates taking aim at the incumbent. “We will be doing everything we can to remove Ted Edwards from office,” Bill Lutz, of Save Orange County, said after the vote. “He did not listen to the 10,000 citizens in this area who said they did not want these developments across the Econ River but, instead, supported a small number of landowners and developers.” Save Orange County said it is considering a lawsuit against the county over the development projects.

“This is just the beginning,” Bonilla added. “We must continue to give the good fight. History has shown time and time again, that the road to justice can at times be long, with traitors along the way, but justice sooner or later always prevails.”

“Our current leadership deliberately ignored that statements made by hundreds of residents, as well as ten thousand petition signatures,” Eisenberg pointed out. “Our leadership chose developer money over our constituents. We will not have a transparent and efficient government when operating in this fashion, and a change is necessary. My focus and plans from here on out involve salvaging our sensitive eco-system while focusing on providing clean water and transportation accessibility to residents in this area.”

The election for District 5 Orange County Commissioner is August 30th.