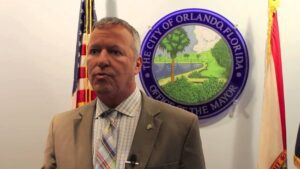 In another example of the corrupt culture in Orlando City Hall, Mayor Buddy Dyer is once again withholding public records – but this time his city records staff and legal team are attempting to use a Florida Statute that was repealed by the legislature. This is not the first time Buddy Dyer, who is a Democrat, has used his city staff to block the release of legitimate public records, and the West Orlando News is already currently investigating bombshell claims related to Orlando City Hall records on another matter that will be detailed soon.


In this current case, West Orlando News was simply trying to verify information related to one City Commissioner. But Buddy Dyer is obviously trying to protect Regina Hill for some reason rather than simply produce basic public records. For months, the West Orlando News has gone back and forth with the City of Orlando for this information. When the record was finally produced, city staff claimed an exemption of the actual information requested, which was completely blacked out.

Deputy City Clerk Laurie Nossair first expressed her own confusion about the records, which is problematic and unacceptable considering her role and title. “I don’t know anything,” Deputy City Clerk Nossair initially said on the phone with West Orlando News before partnering once again with the city legal department. A few minutes later, she called back claiming the information was redacted due to a Florida statute. “Redaction aligns with exemption cited; 119.071 (5)(k),” Nossair wrote in the city’s records request system after the phone call.

However, that statute no longer exists. It actually died in the Florida House in 2020. SB 310 was signed into law and it specifically deleted paragraph (k) of subsection (5) because the exemption was not reinstated and was repealed. In fact, you don’t have to read far into the legislation to find the exemption cited by the City of Orlando, it was in the first sentence:

Why is Orlando Mayor Dyer’s legal team using a statute that was not reinstated to block public records from being released? Wouldn’t a city attorney check the laws they are using to redact information before putting it in writing? How many other lies are being told by City of Orlando staff to block legitimate public records requests?

When West Orlando News called Deputy City Clerk Nossair back just 20 minutes later, we were told she was no longer in office, despite it being mid-afternoon. A staffer then said Nossair was actually in a meeting, but she informed staff she would not be available the rest of the work day. Who knows what is true. No other supervisor, manager or city attorney was available – they were all “out of office” according to those answering the phone. City staff suggested the legal department may be able to help, but we were sent to Assistant City Attorney Andrea Morgan’s voicemail. This is apparently Morgan’s “area of expertise” but she has not returned our phone call at this time.

West Orlando News called the City of Orlando back this morning to clarify and have the records released, but once again we have been told all staff related to this matter are “out of office” and not available. It appears they have all gone into hiding, which raises more questions. The city staff who did answer the phone said no record would be produced until the legal team reviews the matter, again.

This is open government? This is transparency? And all under a Democratic mayor.

This is the sad reality of city staff working in a culture of corruption under Mayor Buddy Dyer. The buck stops at the top and this is clearly the behavior Dyer wants in his City Hall. Orlando city staff is being used to flout state law, making a mockery of Florida’s sunshine laws. This was a simple, minor records request. What about a more complicated or controversial public records request? It’s clear the current City of Orlando staff do not work for the people, they are there to serve the interests of Mayor Dyer and his political allies using public tax dollars.

If you want a public record from Orlando City Hall, be ready to play their games and fight through their lies. Stay tuned for more on this – and our upcoming series outlining another public records debacle that further exposes the corruption of Mayor Buddy Dyer.