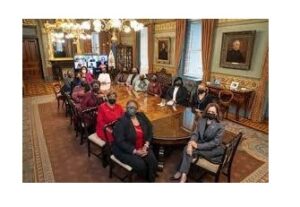 Black women leaders from across the country, gathered in Washington, D.C. earlier this week to meet with Vice President Kamala Harris. The women in attendance said that they stand ready to assist Vice President Harris as she pushes forward with her agenda.


It was a private meeting. According to officials, nearly 20 members of a coalition of groups focused on civil rights issues, Black Women Leaders and Allies, met to discuss their thoughts on how President Joe Biden’s administration could strengthen the right to vote without Congressional legislation.

Vice President Harris, who has been under political attack for months, likely needed the show of support. Among the leaders was Ebonie Riley, Senior Vice president of Policy and Strategic Partnerships for National Action Network and Rachel Noerdlinger, a partner at Mercury, a public strategy firm and a longtime spokesperson for Reverend Al Sharpton.

“We offered a town hall. Have her come and answer some of the questions for our community and that could range from Black women and young Black people, and the community as a whole,” Riley said. “And that way, she’s not put in a position to kind of have it come through the administration. She’s invited to an event where we can kind of give our community an update, and she was open to that. She wanted to explore that.”

“There are communities of stakeholders and validators that would like to lift the vice president and amplify what she is doing,” said Rachel Noerdlinger, a communications strategist who attended the meeting. “But folks want to know what will help and what will hurt her.”