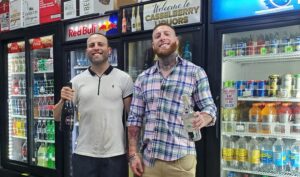 Doug Markovitz and his brother Brad Markovitz have owned Casselberry Liquors for about 10 years, and they say they have worked hard for many years to build up the small business and relationships in the community. “We put blood sweat and tears in building this store up and many, many late nights at the store,” Doug Markovitz said. They were looking forward to signing a 5-year renewal for their location.

But when it was recently announced a BJ’s Wholesale Club was coming to Casselberry, the local business owners never imagined they would get pushed out of the Casselberry Exchange plaza instead – and that’s exactly what is happening, Markovitz says.


After paying rent consistently for 9 years, which Markovitz says totals over $500,000 in payments, they are now being pushed out by the landlord to make way for the big box chain store. The landlord for Casselberry Exchange at State Road 436 and Highway 17-92 is Agre Casselberry Owner LLC, which Markovitz said was a large REIT under the Apollo Global Management umbrella. The developer and property manager is Kitson & Partners.

The whole process, which has been going on for a year, has left the Markovitz brothers frustrated and in limbo. They are hoping the Casselberry community will come together to help them stay. They also say it is a lesson on how big business operates and shows a greater threat to local small businesses.

Last year, Markovitz spoke with Kitson & Partners about an increase in rent, wondering why rent would go up during a pandemic when local businesses were still recovering. They said there was a potential major tenant coming and indicated there could be some changes in the future vision of the plaza. When Markovitz asked for them to send his renewal, he said it never came.

For several months, Markovitz said he attempted to contact various people at Kitson & Partners regarding his lease renewal, but he wasn’t getting any response. “So obviously at this point, the con has really started to pick up with a ping pong show of passing me back and forth between different people without directly getting done what we needed to get done,” Markovitz said. “At this point I was getting frustrated that they were gaslighting me and deflecting me around back and forth to stall me.”

Markovitz provided numerous emails where the property manager indicated they wanted to get the renewal completed, but again he says ultimately he could not get a follow up response for several more weeks. Finally, in January of this year, it appeared the renewal process was back in motion for the small business. But that’s when Casselberry Liquors found out the plan to add BJ’s Wholesale Club which includes a liquor department.


“At that point I was in shock,” Markovitz said. “I was in deep disbelief and I was very disgusted. I told them having BJ’s in the plaza with us would negatively impact our sales and would be extremely harmful to our business as they buy in huge bulk for low prices and work on much lower margins. It would be extremely difficult to compete with them, but I was open to a compromise and fair solution.”

“Once he said this, it really angered me because as you can see I have been attempting to exercise my option to renew since May 2021, but it was them that was jerking me around for 7 months playing games stalling the renewal,” Markovitz said, armed with copies of emails. “I responded back to his email with my displeasure that they jerked me around for many months and did not allow us to properly negotiate business.”

Even though Markovitz provided emails showing his interest to renew as early as May 2021, Kitson & Partners notified him in February 2022 that because the renewal date was missed, they were no longer wanting to offer a renewal option. Markovitz called it crony capitalism and feels the whole process was manipulated from the start.

In fact, in an email dated April 26, 2021, the Director of Property Management for Kitson & Partners, Ryan Tufts, emailed a response to Markovitz about an AC replacement that cost $7,800. Casselberry Liquors covered the entire cost for replacement as a tenant responsibility, but Markowitz asked the property manager if they could help in any way. “If it helps, we may be able to incorporate a contribution toward your AC replacement along with a lease renewal agreement to extend your term beyond your current 5/31/2022 lease expiration,” Tufts wrote. “Let us know if this helps and we can start the process if you like.”

“I did my best to properly do what needs to get this renewal done properly,” Markovitz said. “This is obvious a David vs. Goliath situation. These big landlords and big box chains are ruthless, seem to have no soul, and lack proper business ethics. They think they can bully small family-owned businesses out so they can have less competition.”

Markovitz doesn’t plan to stop fighting for his small business. He is reaching out to local elected officials, other business owners and loyal customers to help. He paid rent for June already, and is remaining optimistic even though the landlord claims he is not under the lease renewal. Right now, he does not know what the future holds for his store, but the battle is far from over. He is worried about his “loyal and trustworthy employees that depend on this job to secure their future and feed their families.”

“The landlord says we need to go because BJ’s is coming in and they have an exclusive clause in their lease to sell liquor,” Markovitz said. “The landlord is demanding that we are supposed to be out now, and they are saying as of June 1st, we are a holdover tenant and they can extort us for 200% of the rent. My feeling is that we are simply following the lease renewal option terms for 5 more years.”

BJ’s Wholesale Club did not respond when West Orlando News reached out for comment.

“This is a slippery slope for many independent stores and family businesses in the future,” he added. “I’m afraid that as small business owners, if we don’t all unite and come together to fight this business hegemony battle and stand up for what is right, later on there won’t be much left to fight for in our community.”

The Markovitz brothers were raised in a middle class family by a single mom. They reflected on what she taught them as they navigate this situation. “Our mom raised us to work hard in entrepreneurship and build up a business and achieve the American dream,” they said. “She raised us in the Jewish faith with integrity, loyalty and honesty. She taught us to treat others how you want to be treated, to stick up for what we believe in, and to have faith and stay strong.”