Featured at the Gallery on First in Sanford Florida, Art and the Abbots are in the spotlight.

Kevin Vaughn and Debe Abbott are an artist couple who maintain seasonal studios in Sanford and Bernhards Bay, NY.  They met in North Carolina in 1981 and, after a whirlwind romance, married later that year.  Aside from the typical things that bring any couple together, they shared a common love for the visual arts.  Kevin was serving as an Army photojournalist at the time and Debe was painting landscapes in oil and watercolor.  Their dates were usually visits to museums, galleries, or other art related outings.

Kevin is also known as KV.  When asked about it, he states, “It’s nothing really, just my initials.” He started signing pictures that way early on.  He was a big J.D. Salinger fan (perhaps that was an influence). Kevin’s work was in photography while Debe did mostly still life and landscape paintings in the beginning of their lifetime art adventure. They did a few outdoor art fairs and entered local group shows while living in North Carolina. 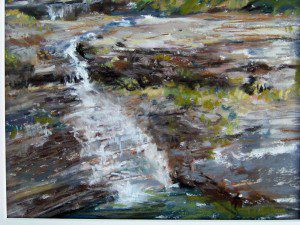 In the fall of 1982 Kevin received orders to attend the Defense Language Institute in Monterey, California.  The couple rented a small house overlooking Monterey Bay.  By the time they were in California, they became a little more serious about their art and were active members in the local art guild.  Kevin won a couple of awards at shows in the area and work began to sell pretty well.  They became fairly well known in Monterey for the short time they were there.

In 1985 Kevin was honorably discharged from the Army and they returned back east where they both had family.  They settled in Central Square, NY just north of Syracuse.  “We really loved living on the coast.  Monterey is beautiful and it was tough to leave, but all of our families were back east.” said Kevin.

In March of 1985 the Abbott’s founded their gallery/ frame shop that they would run until August of 2011.  During the rest of the 1980’s the Abbott’s business grew and so did their art.  Kevin began experimenting with acrylic and encaustic paint in combination with photographs as well as experimenting with wall mounted and free standing sculpture.  Debe continued painting landscapes (mostly watercolor) and also began painting abstract pieces in acrylic and mixed media. 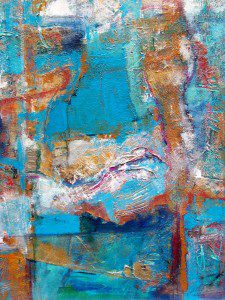 The two became regular fixtures in the Syracuse art scene.  Kevin was winning awards, but not selling much of his work in those days.  Debe’s work seemed to have more appeal, and by the early 1990’s Deb was selling pretty well.  The two went on to show in top regional galleries in New York, Vermont, and elsewhere.

In 1992 Clement Greenberg awarded Debe “Best Work on Paper” for her panting Kilimanjaro at the Canastota Small Scale Exhibition.  This perhaps, more than anything, established the couple as serious artists in the region.  The following year Kevin won the same award at the same show, but without Greenberg’s involvement the show had lost some of its stature. 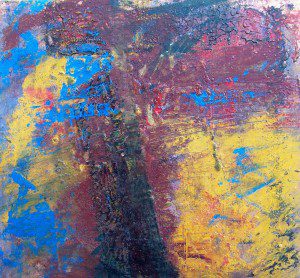 “People often wonder how we can work together and if there is any competitiveness between us.” When asked, Debe simply tells them, “No there isn’t and never has been, other than some good natured ribbing once in a while.”  They really are each others biggest supporters, respect each other’s opinions, and often consult one another about a piece that may be giving them trouble. They have worked together so long in the same studio that people not well acquainted with their work sometimes have trouble knowing who did what.  “I guess we are lucky that way,” Kevin states. “We motivate and inspire one another.  Do we bicker sometimes? —-“Sure! Hey, we’ve been marred 31 years and I guess that is to be expected.  It’s just part of the process.”

If you are an artist longing for a regional and global WONO spotlight, contact Racquel at Artist’s Square at http://artists-square.com or directly at West Orlando News Online.

I leave you with one question to ponder: What’s your ART?

Thank you Racquel for leading the Orlando Art Revolution! Your voice is being heard.

Artists-Square: Connecting You to Felicia Roberts