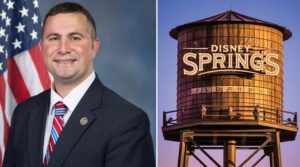 According to the arrest report, Congressman Darren Soto was with his wife, Amanda, at Disney Springs the day she was arrested on April 1, 2018. The arrest affidavit reveals more details surrounding the incident at Disney, but also raises additional questions. Currently in the middle of a hotly contested Congressional primary election, the arrest report details are anything but good news for Darren Soto.


This raises the question as to why Congressman Soto left that part of the incident out of his official statement back in April. The report shows Rep. Soto was with his wife at Disney the day of the arrest but instead left Mrs. Soto and his mother-in-law to fend for themselves after they had too much to drink, per investigators.

“My wife, Amanda, has for years suffered from depression and been under medical care. In accordance with her treatment plan and under her doctor’s supervisor, she recently stopped using her medications,” Rep. Soto’s said at the time in his official statement. “[S]he drank too much and reached an argumentative state with a family member, which led to arrest. She deeply regrets her actions and takes full responsibility for them. Amanda and her physician will be reviewing her mental health treatment, immediately.”

However, the arrest report includes other details that the Congressman’s statement did not reflect. Another fact from the arrest report highlights the fact that Rep. Soto’s wife repeatedly attempted to use her husband’s position in Congress as leverage for her behavior. The deputy obviously felt it was important not only to detail in his arrest affidavit but also to emphasize the comments made by Rep. Soto’s wife. “It should be noted that I attempted to calm Amanda numerous times from her agitated state and that even while attempting to speak with her she continued to utter that her husband is a congressman therefore she can do whatever she wants,” the arrest report states. Hopefully, it was just a drunken comment, but some voters may now question: is this how the Soto family feels about their status in Congress?

Congressman Soto’s statement also ignored the other reality that his wife’s behavior did not simply reach an argumentative state with a family member, but also with an Uber driver, law enforcement and other members of the public, which is what ultimately led to her arrest, per investigators. In fact, initially the deputy determined there was no crime related to the altercation and drunken argument with her mother.

That’s where things took another turn. The Congressman’s wife verbally assaulted an Uber drive with profanity, to the point where the driver refused service and Amanda Soto caused a bigger scene. “Once inside the vehicle, the driver asked where Amanda was going in which she loudly exclaimed, ‘I don’t need you fucking questioning me bitch.’ The Uber driver immediately informed me that she would no longer drive Amanda or her family anywhere and refused them service.”

She was placed in handcuffs and was spoken to again by law enforcement, who said the Congressman’s wife was “screaming profanities and crying hysterically.”

Everyone knows an Uber driver these days – there are a lot of them throughout Central Florida and some are sure to be voters. Again, politically this could be an issue in a primary race that could be very close.

After the attempts to say her husband is a Congressman and therefore she can do whatever she wants failed, she was later transported the Orange County Jail where “she had to be safe booked as a result of her intoxicated and uncooperative state.”

The details in the arrest report raise additional questions compared to Rep. Soto’s limited official statement from April. What was he doing at Disney, why did he leave his wife in that condition, and why didn’t he share that part of the story? Does Congressman Soto believe he is above the law because he is a member of Congress? In an election year that will include a tough Democratic primary challenge, Darren Soto may need to be more upfront with voters and ahead of these kinds of situations moving forward.