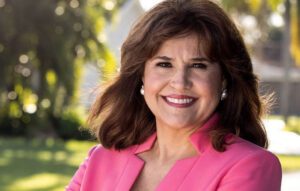 Florida State Senator Annette Taddeo recently dropped out of the Democratic primary for Governor and announced she will run for Florida’s 27th district, the most competitive Congressional seat in Florida.

“Families in Miami need a representative in Congress who will stand up for them, hold Washington politicians accountable and make sure we finally tackle issues like the cost of living, gun violence, and defending a woman’s right to choose,” Sen. Taddeo said. “I’m a small business owner and a mother with a daughter in Miami-Dade Public Schools so I live with these issues every single day.”

“After the tragedies in Buffalo and Uvalde and a conversation with my daughter about the realities our kids face daily, I knew what I needed to do,” Sen. Taddeo added. “We are at a pivotal moment in our country and we desperately need leadership in Washington that can be trusted to put politics aside for the best interests of Miamians. I’m excited for the opportunity to earn the trust and support of the people who live in Florida’s 27th Congressional District which includes much of the area I’ve been grateful to represent in my historic time in the Florida Senate since 2017.”

The demographic make up are: 74% Hispanic, 17% Caucasian, 7% African-American, 3% AAPI – making it one of the most Hispanic districts in the Country.

Charlie Crist, her former opponent in the Democratic primary for Governor, jumped out to support Taddeo’s decision.

“Senator Taddeo is a dear friend and a force to be reckoned with,” Crist said. “She is a tireless public servant and fearless advocate for working Floridians across the Sunshine State and in South Florida. I thank her for her leadership, civility, and fighting spirit in Tallahassee and in this governor’s race. And I wish her nothing but the best as she embarks on her run for Congress.”

Crist went further and offered Taddeo a formal endorsement for her congressional bid.

“Annette is a trusted and battle tested public servant who will never relent in the fight for what’s right. From Kendall to Key Biscayne, Annette will make sure your voice is heard and that South Florida’s working families have a champion in Washington,” Crist said. “There is no better leader for this critical race. I am proud to offer State Senator Annette Taddeo my full support and endorsement in her run for Congress.”