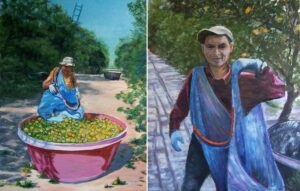 An exhibition of twelve paintings that captures the working spirit of a Florida orange grove is open at the Atrium Gallery inside the Orange County Administration Building in Orlando. Tony Rosa is the artist that created the works and came up with the tile of the collection, “American Pickers.” He is a big fan of the same-named television program, and feels the exhibit has at least one thing in common: they both feature a search of the back roads that resulted in a discovery of hidden treasures.


Tony Rosa lives in Florida’s heartland. In the spring of 2019 he stopped at an orange grove within a mile of his house and asked for permission to spend a little time among the workers. “From that short visit,” Rosa says, “I felt something extraordinary happened.” Painting the scenes became a compulsion for him. “I was inspired and energized and worked like a mad man for ten straight weeks. I’m convinced the whole process was a magical moment with the proof being in the effort and motivation that moved me to tell the story.”

“Ultimately, I chose the title ‘American Pickers’ because I felt it was the best description. My purpose was not meant to be any kind of political statement, but will hopefully make some viewers pause to think about what is portrayed and how accurate and appropriate the title is. Even though my Spanish language skills are limited, I understood the phrase, ‘Muchas Naranjas.’ I was greeted with the phrase and smiling faces as I wandered the grove. It was only fitting to use it as the title for a number of the paintings.”

For three consecutive years, Tony Rosa’s paintings took the top prize, “Juror’s Choice” at the Tampa Bay Lightning’s Annual Celebration of the Arts. More than 500 entrants were received each year and reviewed by a blind panel of jurors that included representatives from the Tampa Museum of Arts, the Ringling Museum of Art, the Museum of Fine Arts in St. Pete, and the Dali Museum. Another of his works, “Bayonets and Bougainvillea” currently hangs in the mural plaza at the A. E. Backus Museum and Gallery in Fort Pierce, Florida. His works have been juried into national exhibits.

“American Pickers” will be on display in the Atrium Gallery inside the Orange County Administration Building at 201 S. Rosalind Avenue, Orlando, FL 32801 until November 30, 2021.