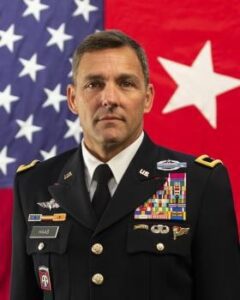 Major General Haas is the Assistant Adjutant General – Army and the Commander of the Florida Army National Guard (FLARNG). Prior to assuming his position, he was the Director of Strategic Plans, Policies, and Programs for the Florida National Guard.

General Haas will become the Adjutant General of Florida upon the retirement of Major General James O. Eifert.

Previously, he was a Special Agent for the Miami-Dade County Office of the Inspector General. Soler is also a captain in the United States Navy Reserve, concurrently serving as the Commanding Officer of Central Command J2 San Antonio and the Deputy Reserve Director of Intelligence for CISC San Antonio.

He enlisted in the United States Marine Corps in 1983 where he was recognized as the Platoon Honor Graduate. Soler received a direct commission in the Navy Reserve in 1996 and affiliated with the Defense Intelligence Agency. In 2006, he was mobilized during Operation Iraqi Freedom where he was assigned to Multinational Forces–Iraq, 1st Marine Expeditionary Force (Forward), as Officer in Charge of three Exploitation Teams and Detainee Operations Centers in the Al Anbar Province. Soler has completed four other command tours and has received numerous personal awards including the Legion of Merit, Defense Meritorious Service Medal, Meritorious Service Medal, Joint Service Commendation Medal, and the Navy and Marine Corps Commendation Medal.