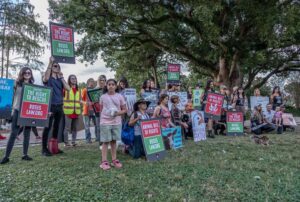 Activists with the grassroots animal rights network Direct Action Everywhere (DxE) gathered at Lake Eola Park on Saturday, then led a march through downtown Orlando to demand liberation and justice for animals. The demonstration attracted dozens of participants, both local and non-local, with some traveling across state lines and even international borders to join the chanting throng.

Bold signs held above the heads of the marchers featured block-lettered assertions such as, “Fur is murder,” “Humane meat doesn’t exist,” and “Ditch dairy – babies belong with their mothers.” Other signs depicted images of bloody animals inside factory farms and slaughterhouses. Many of the signs included a reference to “Rose’s Law.”


According to RosesLaw.org, Rose’s Law is a piece of proposed legislation which seeks to use civil engagement and nonviolent action to ensure that everyone, regardless of race, gender, ability, or species, is granted basic rights. The bill points to scientific evidence that animals are sentient individuals, and therefore deserve to be protected from oppression. It also highlights the necessity of standing up for those who are abused or exploited, which should decriminalize the “right to rescue.”

In a recent victory for DxE, group leaders Wayne Hsiung and Paul Picklesimer made New York Times headlines when a jury found them not guilty on all charges in the Smithfield piglet rescue trial. According to a statement read by lead speaker Craig Miranda during Saturday’s protest, the acquittal of Wayne and Paul gives weight to the right to rescue philosophy, indicating society’s shifting perception of animals.

With plant-based food companies on the rise, fur bans increasing in number, and animal welfare regulations growing stricter in many states, to say that a sort of societal evolution is taking place would not be a far reach. DxE Orlando’s successful 2022 campaign to have foie gras removed from the menus of five local restaurants is yet another sign of progress. This win, along with the Smithfield trial victory, was met with widespread enthusiasm on social media.

The Lake Eola march brought even more evidence of shifting public attitudes about animal rights to the fore. While some of the group’s onlookers scowled and shouted castigations, a surprising number were seen fist pumping, shooting thumbs-ups, and even yelling their support. Others waved or smiled curiously – these folks were plied with informational pamphlets and words of encouragement from activists. An elderly man passing on the sidewalk proclaimed, “I’ve been vegan for more than 20 years! Thanks for what you’re doing.”

Here are some photos from the DxE Orlando animal rights march in downtown: 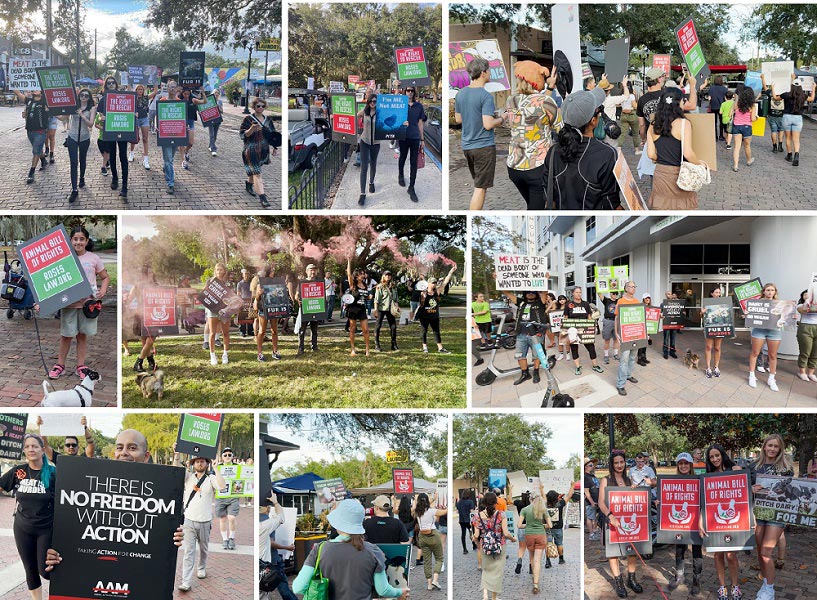