This is part three of a three-part series on the write-in candidates for Orange County Clerk of Courts. 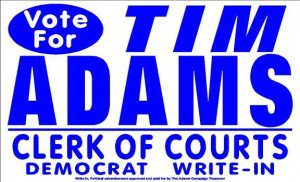 Another option for the ______ (blank) line on your ballot for Clerk of Courts is Tim Adams. After over 42 years of service and experience with the Democratic Party, Dr. Adams understands the great expense and sacrifice involved in the process. He also is quick to answer what is the best part about being a write-in candidate with “That’s an oxymoron.” And his 42 years of service and his family’s dedication to Democratic candidates in the past also make the local Democratic Party’s lack of recognition or support more of an issue for Adams.

“Heck no, I didn’t expect the local party to be so dismissive,” Adams said. “I have done more for the Democratic Party than our current Chairman in Orange County who takes credit for work that other people have provided. There will be reckoning for their actions. There will be a strong backlash from our supporters.”

Adams decided to qualify as a write-in for this office because he also views the high cost qualifying fee of $9,000 as a poll tax. He also mentioned that the Democratic Party does not help all candidates pay these fees, although both parties do provide these resources for some. As a campaign veteran on local Democratic campaigns, Adams is frustrated on many fronts. In response to the local Democratic Party not including his name on their materials or literature, he has a scathing commentary.

“It makes us realize that they want African-American votes, but have no Respect for us,” Adams stated. “Nor do they intend to share our Democratic money or even a slate card with those of us who have worked so long and so hard to elect Democrats in Orange County.”

Meanwhile, Tim Adams is hard at work, putting his get out the vote experience to work on the streets. He is also running as an accessible candidate utilizing online social media, while also attending community events and continuing his work within the community. Adams will always point out that many leaders were elected as write-in candidates and that his name recognition is strong. He has been on the ballot, remained active over the years and is a known voice in Orange County.

But he does predict win or lose that there will matters to deal with after Election Day. “This situation will definitely explode after November 2012.”

Part one of this series can be found here. Part two spotlighted Randy Ross.