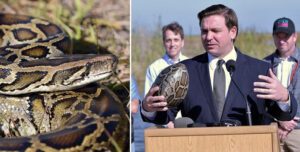 Governor Ron DeSantis announced that registration for the 2022 Florida Python Challenge has opened and the annual 10-day event will be held August 5-14, 2022. Members of the public are now able to take the required online training and register to compete to win thousands of dollars in prizes while removing invasive Burmese pythons from the wild. The competition is open to both professional and novice participants.

“The Everglades is one of the world’s most prized natural resources, and we have invested record funding for Everglades restoration projects, including record funding for removal of invasive Burmese pythons which wreak havoc on the ecosystem,” said Governor DeSantis. “Because of this focus, we have removed record numbers of invasive pythons from the Everglades. I am proud of the progress we’ve made, and I look forward to seeing the results of this year’s Python Challenge.”


“The Florida Everglades is an iconic habitat in Florida and removing Burmese pythons from this ecosystem is critical to the survival of the species that live in this vast wild area,” said FWC Chairman Rodney Barreto. “Under the leadership of Governor Ron DeSantis, the FWC and our dedicated partners continue to have great success conserving our native wildlife and managing this invasive predator.”

“The Florida Python Challenge provides an opportunity for people to actively participate in Everglades conservation by removing the Burmese python, an invasive species that is actively damaging our native wildlife populations,” said Florida Fish and Wildlife Conservation Commission (FWC) Executive Director Eric Sutton. “We are grateful for the leadership of Governor Ron DeSantis, who continually demonstrates his commitment to combating invasive species which is a critical component of conserving our native species.”

“As a South Florida native, I am thankful to Governor Ron DeSantis for his ongoing commitment to Everglades restoration and protecting our natural resources,” said South Florida Water Management District Governing Board Member “Alligator Ron” Bergeron. “The great partnership between the South Florida Water Management District and the Florida Fish and Wildlife Conservation Commission is critical as we work together to protect the Greater Everglades Ecosystem and combat invasive pythons. Thanks to the Governor’s leadership we now host the Python Challenge annually, and I appreciate the efforts of every python hunter who is participating!”

“In partnership with the Florida Fish and Wildlife Conservation Commission, the South Florida Water Management District is removing about 60 percent more pythons each year under the leadership of Governor DeSantis,” said South Florida Water Management District Executive Director Drew Bartlett. “The Python Challenge is yet another way to get people directly involved in the protection and stewardship of the Everglades. We continue to expedite Everglades restoration efforts thanks to the support of Governor DeSantis, and we’ll continue doing everything we can to protect this important ecosystem.”

Register online for the competition, take the online training, register for optional in-person trainings, learn more about Burmese pythons and the unique Everglades ecosystem, and find resources for planning your trip to South Florida to participate in the Florida Python Challenge®.

Participants in the 2021 Florida Python Challenge® removed 223 invasive Burmese pythons from the Everglades, more than double the number that was removed in 2020. Over 600 people from 25 states registered to take part in the 10-day competition in 2021.

The Freedom First budget, recently signed by the Governor, makes a record investment of up to $3 million for python removal efforts, including to support research and development of innovative technologies that detect and remove invasive pythons. This includes the development of near-infrared cameras that better detect pythons.

Since 2019, the state has taken unprecedented action to remove pythons in Florida:


In addition to python removal efforts on public lands, pythons can be humanely killed on private lands at any time with landowner permission — no permit or hunting license required — and the FWC encourages people to remove and kill pythons from private lands whenever possible.

Burmese pythons are not native to Florida and negatively impact native species. They are found primarily in and around the Everglades ecosystem in south Florida where they prey on birds, mammals, and other reptiles. A female Burmese python may lay 50 to 100 eggs at a time. More than 16,000 Burmese pythons have been removed since 2000.